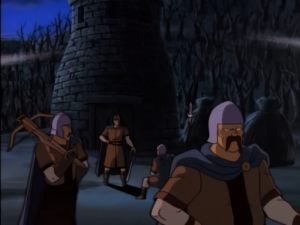 The storehouse guards were four humans who guarded a storehouse that was raided by Demona's Clan in 1020.

Demona's Clan apparently had a history of raiding the storehouses frequently since one of the guards hoped they would not come that night.

They did come that night and threw a net over the guards, incapacitating them. After ransacking the storehouse and as they were about to make their getaway, one of the guards yelled to them that the Hunter would wipe them off the face of the Earth. Incensed by his threat, Demona killed the guards with her mace.

Although the episode does not specify it, the background memo has the site of the raid in Dunsinane, Scotland. [1]

When his daughter asked if the guards were dead, Greg Weisman equivocated. [2] However, in the commentary for "City of Stone" Part One, Greg Weisman, Frank Paur, and Michael Reaves joke about how their Standards and Practices executive, Adrienne Bello, must have been sick that day for that scene to get on television.