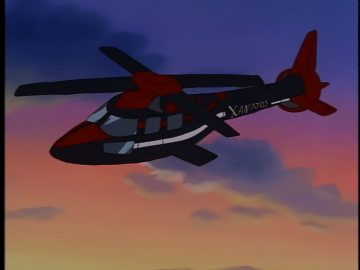 Xanatos makes use of the helicopter when traveling, seeming to prefer it to ground travel, such as when he chose to travel by air to PackMedia Studios.

While he initially hired Derek Maza to be his personal pilot, his wife, Fox, seems to have stepped into the role.

Xanatos used his helicopter to rescue the Manhattan Clan from police capture during the night of the Hunter's Moon in 1996.

The helicopter is black with touches of red and silver.