Difference between revisions of "Brooklyn's Motorcycle" 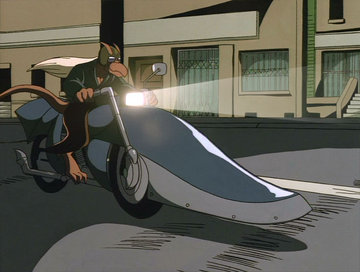 "Brooklyn's motorcycle" was designed and built by Lexington. Brooklyn took it out on its maiden joyride, where it was destroyed by redneck bikers whom he tried to befriend.

Lexington and Broadway never got a turn. ("Temptation")

November 7th, 1994: The Trio finds an old abandoned motorcycle, and Lex decides to rebuild it.

November 11th, 1994: Lex finishes fixing the motorcycle, and Brooklyn takes it for a ride. He is attacked by a motorcycle gang that destroys the bike. Demona comes to his aid against the humans and uses this incident to turn Brooklyn against humans, though he see later that she has twisted the truth.

The motorcycle was requested by Kenner. Not seeing a place for it in the series, the production team blew it up before the first commercial break. The toy was released as the Rippin Rider Cycle.