Difference between revisions of "Chaz" 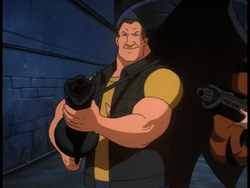 Lou and Chaz as Quarrymen.

Chaz was one of the human goons who supported Fang in his attempt to seize control of the Labyrinth in January 1996. [1] He was subsequently banished from it, after Talon assumed leadership there. ("Kingdom")

Later that year, he and his partner, Lou, joined the Quarrymen. On the night of Halloween, wanting a strong Quarryman presence in the streets, Chaz wished to carry his hammer, but got overruled by John Castaway (who didn't want to risk provoking a public incident). ("Invitation Only", "Masque")