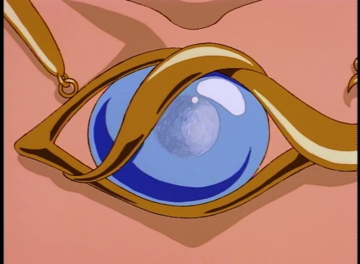 At some point before 975, the eye was transformed into a jewel, which (linking to Odin's own power) increased the powers of whoever wore it; however, it would also corrupt them, in a manner reflecting the strengths and weaknesses of its wearer. [1]

Presumably Mimir's later decapitation allowed an unknown party to claim the Eye (as salvage) and begin its path that would eventually bring it into modern times. As Greg Weisman once remarked, it's, "Hard to hold onto something after you've been beheaded". [2][3]

Its detailed history is unknown until 1994. By this time, it had somehow come into Xanatos' possession. Xanatos donated it to the Museum of Modern Art, but afterwards had a Steel Clan robot steal it from there, partly to frame Goliath for the theft and thereby make the citizens of New York aware enough of the gargoyles' existence that he could manipulate the clan into giving itself up to him for its own safety, partly so that he could gain the leverage of having donated the Eye of Odin to the MOMA and still keep it for himself. ("The Edge")

Not long afterwards, Macbeth and Demona stole the Eye from the clock tower, alongside the Grimorum Arcanorum and the Phoenix Gate, under the Weird Sisters' influence. ("High Noon") They then proceeded to give all three objects to the Archmage, allowing him to become a nearly all-powerful sorcerer. The Eye of Odin in particular transformed the Archmage into an enhanced version of himself (and would compensate his dangerous mixing of magics), giving him the ability to consume the Grimorum Arcanorum so that it could safely be taken into Avalon. [4] In battle, Goliath finally stripped the Eye from the Archmage, bringing about his destruction from an unstable Grimorum. ("Avalon" Part Two; "Avalon" Part Three)

Goliath kept the Eye afterwards, hoping to keep it out of the wrong hands once again, until he and his companions came to Norway during the Avalon World Tour and encountered Odin, who now wanted the Eye back. In final desperation to keep the Eye out of Odin's hands, Goliath donned it and was transformed into a quasi-avatar of the Norse god, possessing near-divine powers; however, the Eye slowly corrupted him even as it had done to Fox and the Archmage, so that, under the guise of protecting his friends, he became increasingly obsessed with destroying Odin as his one rival to ownership of the Eye. [5] Angela finally brought him to his senses, and Goliath quickly discarded the Eye, reverting to normal. Odin claimed it, and made it part of himself once again, presumably permanently. ("Eye of the Storm")

The Eye of Odin was created for the Gargoyles video game by Patrick Gilmore of Disney Interactive. It was encorporated into the television series (initially as a generic macguffin in "The Edge") to help create synergy between the two versions of the property.

Greg Weisman has stated that he prefers the video game's design of the Eye, which has a more Norse feel (complete with ravens), over the television show's version, which always looked somewhat Egyptian to him. [6][7][8]