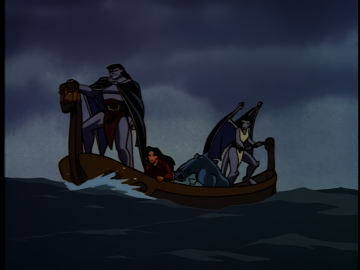 A skiff is a small boat, although the precise meaning of the word varies. Within the Gargoyles Universe, the term refers to any of the wooden sculling boats that Princess Katharine, Tom and the Magus first used to travel to the island of Avalon. In particular, it refers to the specific boat that was used by Goliath, Elisa Maza, Bronx and Angela during the Avalon World Tour.

These skiffs have a tiller at the stern, and at the prow a carved figurehead of an unknown bearded figure. While its true significance has yet to be revealed, the individual who inspired the skiff's figurehead also inspired the face seen on the Weird Sisters' barge. [1]

In 542, a skiff was used to transport Arthur Pendragon to Avalon after the Battle of Camlann. [2]

On September 28th 995, Princess Katharine, Tom and the Magus fled Constantine's court along with Tom's mother Mary and the lady Finella. They took several skiffs and fled to Avalon, although Mary and Finella returned to Scotland in order to safeguard the Grimorum Arcanorum.

Every hundred years, Tom took one of the skiffs and travelled out into the world. On December 28th 1995, he eventually encountered Goliath. Tom, Goliath, Elisa Maza and Bronx all travelled on a skiff back to Avalon in order to fight the Archmage. ("Avalon" Part One)

Once the Archmage was beaten, his henchmen Macbeth and Demona were cast away from Avalon on a skiff. They arrived in Paris. Arthur Pendragon also took a skiff, in order to explore the world he had woken up in. He eventually reached London, where his skiff sank as soon as he had stepped off. It returned to Avalon shortly afterwards. ("Avalon" Part Three, "Sanctuary", "Pendragon") [3]

A third skiff was taken by Goliath, Elisa Maza, Bronx, and Goliath's daughter Angela, who then embarked on the Avalon World Tour. When they returned to Manhattan, their skiff also sank and returned to Avalon, as Arthur's had. [4]