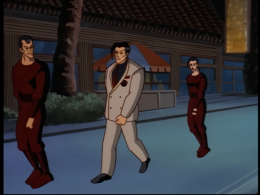 Taro with two of his ninjas.

Taro’s ninjas were mercenary martial artists in the employ of Taro.

Taro's ninjas helped Taro abduct the Ishimura Clan and their guests, Goliath, Angela and Bronx. The three ninjas were able to knock out Hiroshi and the other Ishimura citizens on watch that day. They were not expecting Elisa, who defeated the ninjas, but was knocked out by a tranquilizer dart fired by Taro. Taro's ninjas later helped him lock up Goliath, Angela and Bronx. When Elisa and Hiroshi came to free the gargoyles, the latter knocked out one of the ninjas in the Gargoyle Theme Park control room.

The ninjas were two men and a woman.