From GargWiki
(Redirected from Demona's Second)
Jump to: navigation, search 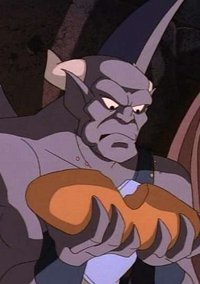 "Second" was an unnamed gargoyle in ancient Scotland. He never had a true name, but "Second" is used to identify him.

At some point after that, but before 997, this new clan was destroyed. Second, however, managed to survive somehow along with his mate and a few others and shortly after they joined Demona's Clan as the Lunfanan Cell. Demona appointed him her second-in-command.

In 997, the Gargoyle of the Sword enlisted Demona's scattered clan to aid him at the Battle of Rathveramoen and Second felt this was a wise move, eager to fight a true battle. Unfortunately, he suffered a terrible loss against Constantine's forces. When Brother Valmont unleashed his rain of magical arrows, he was almost struck down but his mate shielded him with her own body, sacrificing her life to save his. ("Tyrants", "Phoenix")

For the next twenty-three years Second and the surviving members of his clan eked out a life hidden in Scotland. Survival was not always easy as they often battled hunger and lived in constant fear of discovery and destruction by humans, particularly a new menace calling himself The Hunter, a gargoyle-slayer. They often raided human food stores and farms to survive, much to the dismay and frustration of Second. It seems that this empty existence and the loss of his mate had taken its toll on Second and he had lost his desire for battle. In fact, he was one of the only gargoyles in the clan brave enough to mention making peace with some of the humans in Demona's presence. ("City of Stone" Part One)

In 1040, he survived an attack on the clan in their cave roost by Duncan and his men. The clan was forced to move to a new lair and a new territory even though, as Second pointed out, the hunting there had been good. He was also shocked that Demona remarked that the clan had no other capable leader. ("City of Stone" Part Three)

Shortly thereafter, the clan assisted Macbeth in his battle against Duncan and after they defeated him, Macbeth placed the clan under his protection, hoping for a new golden age between humans and gargoyles.

Unfortunately, only seventeen years later, in 1057, the clan was at war with humans again, this time with Canmore and his English allies. Despite being 139 years old, Second continued to fight alongside his clan, albeit somewhat reluctantly. Sadly, Demona betrayed Macbeth to Canmore, giving Canmore the opportunity to betray her. Canmore and his men destroyed Second and the rest of the clan, leaving Demona alone. ("City of Stone" Part Four)

Second was a large, powerful gargoyle. He had a ruddy-brownish skin coloring, but lacked hair. He had no brow horns, just standard ridges, but did possess two large horns coming from each side of his head. His wings were similar to Brooklyn's, but had only a single claw at the apex instead of three. He wore a breastplate across his chest and had armor around his forearms, but carried no weapons.

This character was referred to as "Second" in the scripts for the comics he appears in. Like "Othello", "Desdemona", and "Iago", it is a non-canon name which is never used in the TV show or the comics. Calling him "Second" was probably just simpler than calling him "Demona's Second" when his name had to be typed repeatedly.