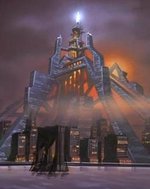 "Future Tense" is the fifty-sixth televised episode of the series Gargoyles, and the forty-third episode of Season 2. It originally aired on April 25, 1996. It is a popular episode among fans and is known for its non-stop, astounding revelations and foreshadowing of future events. The episode also features beautiful animation and amazing voice acting.

"Future Tense" is set at the end of the Avalon World Tour as Goliath wishes to return home, although most of the action takes place in a bleak alternate future in the year 2036. Xanatos has conquered Manhattan and he oppresses the inhabitants from his high-tech Eyrie Pyramid. A resistance led by an older Brooklyn seeks to end Xanatos' tyranny. The episode was inspired by "Days of Future Past", a seminal story from X-Men comics. A visual of the destroyed Statue of Liberty was also inspired by the famous scene from Planet of the Apes.

Although Goliath's return to Manhattan in "The Gathering" ensures that this alternate future will not happen, it remains unclear how many elements will eventually come to pass. Some elements (such as the destruction of the Clock Tower) have already occurred, but others have not. Allusions to the episode have appeared as recently as "Bash", and repercussions such as the fate of the time-travelling Phoenix Gate were also addressed in "Phoenix". (more...)