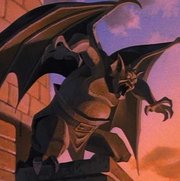 Stone Sleep is the natural and biological process that causes gargoyles and gargoyle beasts to turn to "stone" during the daytime. In this state, gargoyles dream, their injuries are healed, their bodies are purified of toxins and they awake refreshed, rejuvenated and energetic. In many ways, stone sleep is one of the biggest reasons gargoyles were successful enough to form clans around the world. Stone sleep, however, was exploited by humanity and an advantage quickly became a liability for gargoyles as many clans were destroyed with ease, as in the Wyvern Massacre.

Stone sleep cannot usually be avoided. Being deep underground, gliding in the air or just outright fighting the process have all shown to be useless in avoiding the change. Only magical intervention has allowed gargoyles to remain awake during the daytime. (more...)