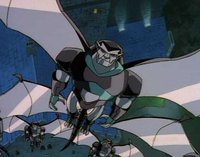 The Steel Clan is a series of robots designed and built by Xanatos Enterprises using stolen Cyberbiotics technology. Xanatos initially put the robots into service to replace the gargoyles as loyal servants, but the Manhattan Clan was able to destroy the first batch produced.

This failure led to upgrades in future versions of the robots that made them tougher and more difficult to destroy. Despite the superior robots produced after the upgrade, Xanatos went on to seek beings he could control in the form of mutates and clones. He does, however, continue to use the Steel Clan as fighters as well as worker drones. On several occasions he has purposely destroyed one or more of the robots in order to accomplish other goals and seems to have an ample supply of them, as well as the resources to build more.

Xanatos' exo-frame armor was designed to look nearly identical to a Steel Clan robot, with the only exterior differences being the number of fingers and the color scheme. A much larger version of the Steel Clan (called the Iron Clan) was later produced specifically to combat Oberon. (more...)