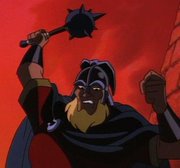 The Wyvern Massacre was the daytime destruction of nearly the entire Wyvern Clan of gargoyles inhabiting Castle Wyvern, Scotland in 994 AD. Though the gargoyles themselves were destroyed by Hakon and his Viking band, the discord between the clan and the resident humans contributed greatly to the event.

Of greatest importance was the betrayal of the Castle by Demona and the Captain of the Guard. They had agreed to lure the gargoyles away from the Castle at night and then let the Vikings sack it. When Goliath refused to lead the gargoyles away, the traitors modified the plan to have the Vikings attack during the day while the clan slept. The Captain vowed to keep the gargoyles safe, but he was unable or unwilling to prevent Hakon from shattering the helpless clan. Demona had suspected this might happen and had fled without warning her clan-mates. Several gargoyles were in the rookery with the clan's eggs and managed to survive, as did Goliath and Hudson, but the bulk of the clan died that day. (more...)