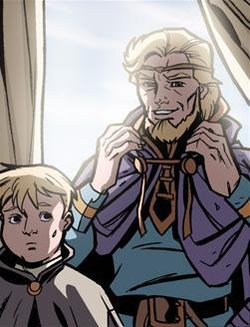 Kenneth III was the son of King Duff of Scotland and was known by many as The Grim. He was also the father of Bodhe.

Kenneth III was born in 967, the same year that his father was slain at the Battle of Gaine. ("Once Upon A Time There Were Three Brothers...")

In 995, Constantine III murdered Kenneth's uncle, Kenneth II. As the rightful heir to the Scottish throne, he worked towards Constantine's defeat.

In 997, with the help of Maol Chalvim II, Findlaech of Moray, Demona's Clan and Brooklyn (who had arrived in this time on his first TimeDancer adventure) he overthrew and killed Constantine III at the Battle of Rathveramoen. ("The Gate", "Tyrants", "Phoenix")

Kenneth then became King of Scotland, only to be overthrown and slain by Maol Chalvim eight years later. [2]

Kenneth III is a kind, approachable warm hearted man, truly a stark contrast to his nickname, the Grim. It has been pointed out that the nickname would have been more befitting of his cousin, Maol Chalvim II. It was Kenneth who first suggested that using gargoyles against Constantine's forces would be advantageous for the army of the Three Brothers (no doubt influenced by his ancestors' alliances with the creatures over the years). He seized the opportunity to ally with Brooklyn when the gargoyle was brought to him by Mary and Finella.

Kenneth III was a real Scottish king, and believed to have been the father of Bodhe and grandfather of Gruoch, Macbeth's wife. His history went pretty much the way as described in the entry above.

According to Greg Weisman, Kenneth III was originally written in "Avalon Part One", but was cut early on because the episode, "was just getting too damn complicated." [3] He was later introduced on Ask Greg in 1997 as a character in Once Upon A Time There Were Three Brothers..., long before Kenneth's canonical inclusion in the Gargoyles Universe in 2008.

While writing for the comic book, Greg Weisman mentally casts new characters so he can hear a voice. For Kenneth III, his actor of choice is Cary Elwes. [4]