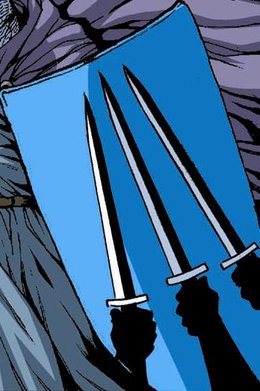 The Standard of the Three Brothers.

The Three Brothers were Duff, Kenneth II, and Prince Malcolm. The sons of Maol Chalvim I.

The period in which each of the three brothers lived lasted for only thirteen years, from the time Malcolm was born at Edinburgh Castle in 954, to the time Duff was the first brother to die at the Battle of Gaine in 967. ("Once Upon A Time There Were Three Brothers...")

Malcolm would be the second brother to die, occurring at some point between 984 and 994 (from causes as yet unknown), with the remaining brother, Kenneth II, alive until his murder in 995. ("Avalon" Part One) [1]

When Kenneth III, son of Duff, led his armies against Constantine III, his banner was that of three swords, representing the three brothers. ("Phoenix")

Duff and Kenneth II were indeed the sons of the historical King Maol Chalvim I, but Prince Malcolm was a fictional addition to the series. [2]