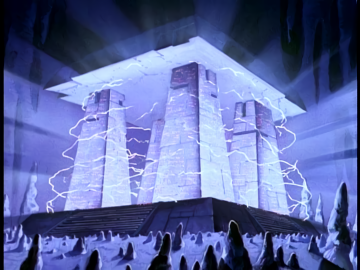 The Megalith Dance is a mysterious megalith found in a great chamber deep in the Archmage's Cave.

It was built by persons unknown at some point in the remote past, and charged with considerable magical energy. During their thousand years trapped in the Archmage's cave as ghosts, the Captain of the Guard and Hakon learned how to use its power and, when Goliath came to the cave at the beginning of the Avalon World Tour, used it in an effort to drain off his life-energy and transfer it to themselves. However, when the Captain repented of his original decision and saved Goliath from Hakon, the Megalith Dance was destroyed in the ensuing magical confusion. ("Shadows of the Past")

The Stone of Destiny has hinted that it is connected to the Megalith Dance. ("Rock of Ages")

The term "Megalith Dance" does not actually appear in the televised episode, but originally stems from Greg Weisman's comments on "Shadows of the Past"; it first entered canon with the Stone of Destiny's speech in "Rock of Ages". Presumably, the "Dance" part of its name stems from "the Giants' Dance," an alternate name for Stonehenge used by Geoffrey of Monmouth in his History of the Kings of Britain. [1] Greg admits that he's always liked the notion "that Stone Dances, that Megalith Circles were like Medieval Mystic Dynamos. Circles of power. That build and generate." [2]