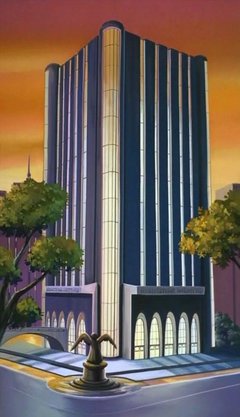 The Nightstone Unlimited building in Manhattan.

As of Halloween 1996, Brentwood and Shari reside at the Nightstone Unlimited building with Thailog. ("Bash")

The Nightstone building is several stories high. While not a very tall skyscraper, it is still impressive.

The building features an angel shaped fountain in front, which creates a small moat that surrounds the building. A bridge over the moat allows people to enter and leave the premises. 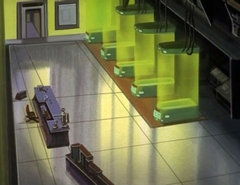 The Nightstone building has its own laboratory where Sevarius created Delilah, Brentwood, Hollywood, Malibu and Burbank and is seemingly at work on a new experiment involving gargoyle DNA that Thailog "acquired" from the Manhattan Clan. ("The Reckoning") 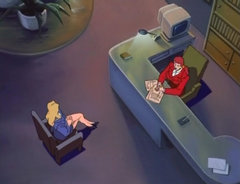 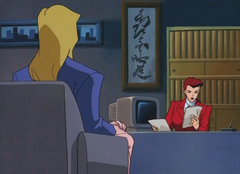 Dominique Destine's office from another angle.

Dominique Destine kept an office there, which she has since abandoned. The office itself was decorated with a slight Asian flair. Thailog has also used this office. ("Hunter's Moon" Part One) [1] 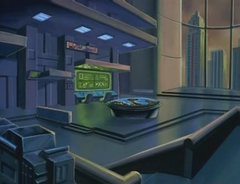 Behind Dominique Destine's office was a hidden command center. The purposes of the room are, as of yet, not known. ("Hunter's Moon" Part One)

Thailog enjoys living in hedonistic luxury as evidenced by the chaise he keeps, as well as at least one jacuzzi. ("Reunion", "The Rock") 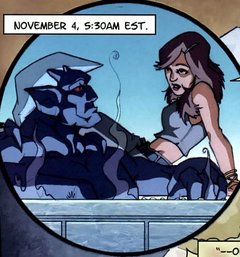 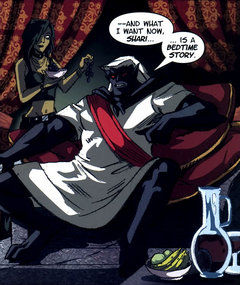