From GargWiki
(Redirected from Robotic mosquito)
Jump to: navigation, search 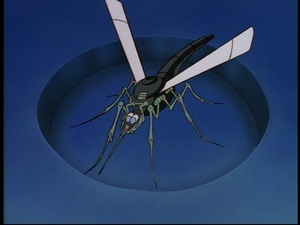 A Micro-Electric Mosquito is, as its name suggests, a small insect-like robot capable of inconspicuously drawing blood or skin cells from a target.

The robot may or may not have been developed by Nightstone Unlimited, but in either case Demona and Thailog used such a device in order to gather DNA samples to create the Clones. Demona kept them inside a specially created belt buckle and released them to acquire DNA from Lexington, Hudson and Broadway. Only one was seen inside the buckle, but it either returned to Demona shortly after delivering Lex's DNA, or, more likely, Demona had others hidden in the buckle or elsewhere. In the making of the Clones, cell samples were also obtained from Brooklyn, Elisa Maza and Demona herself. The samples from Brooklyn and Elisa were obtained using a robotic mosquito, however these were probably released by Thailog since Demona was either inside a building or unconscious when they were "bitten". The DNA sample from Demona was obtained by Thailog probably quite easily and without her knowledge.

The small robots were programmed to return to the Nightstone building where Anton Sevarius was waiting to retrieve their stolen cargo. Using the samples, Sevarius created Burbank, Malibu, Hollywood, Brentwood and (without Demona's foreknowledge) Delilah. ("The Reckoning")

Later, when Thailog intended to gather DNA from members of the Manhattan Clan, he did not use robotic mosquitoes, opting instead for a more direct approach. ("Bash")

DNA-capturing robot mosquitoes were also featured in the Buzz Lightyear of Star Command episode, "Clone Rangers", which was written by Greg Weisman.