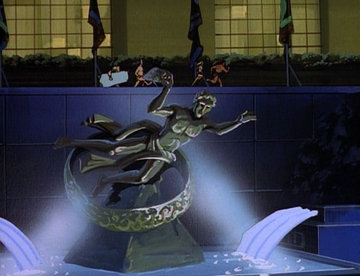 The statue at Rockefeller Center.

Rockefeller Center is a business and entertainment center built by John D. Rockefeller Jr. in the late 1920s, covering 22 acres and composed of 19 buildings, including the Rockefeller Plaza and the Radio City Music Hall. A noteworthy landmark here is an 18 foot tall bronze statue of Prometheus, overlooking the Plaza's skating rink/Summer Garden Restaurant.

The Summer Garden Restaurant was the site of Goliath and his clan's final battle with Demona and Puck, during the "Titania's Mirror" adventure. ("The Mirror")