From GargWiki
(Redirected from The Last)
Jump to: navigation, search
This is a canon-in-training article. Information in this article is subject to change before it becomes canon. 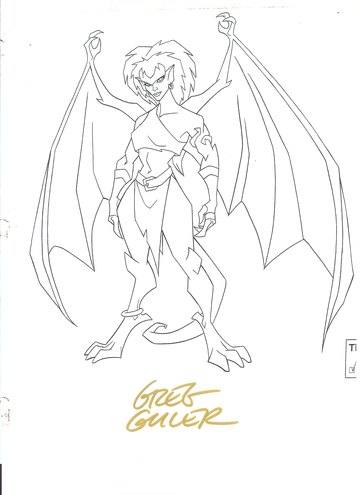 "The Last" was an unproduced episode of Team Atlantis written by Greg Weisman. The episode was a pseudo-crossover with Gargoyles taking place in Paris, in the year 1920. With permission from Tad Stones and Jay Fukuto, Greg was allowed to tell a new Gargoyles story in this series. He even got Marina Sirtis to reprise the role of Demona (referred to in the script as "The Gorlois") and Sheena Easton to play the part of Fiona Canmore.

It was adapted into a Radio Play and performed at the Gathering of the Gargoyles in 2002.

As the episode opens, we see Fiona Canmore smashing gargoyle statues at Notre Dame Cathedral only for the sun to set and the Gorlois to make her escape, injuring Fiona in the process. Fiona makes her way to a hospital where she is reunited with an old flame, Joshua Sweet.

At the same time, the Gorlois makes her way to Paris's catacombs to continue digging for the Praying Gargoyle. There she encounters Queen Kida, Mole, Vinny, and Obby. After a brief struggle, Kida identifies Demona as a Gorlois and tells us that long ago, the Gorlois were allies of her father (the King of Atlantis) and regarded as trusted friends. She and the others take pity on the Gorlois, and Mole develops a strong and even more comedic crush on her.

Having agreed to help Fiona hunt down the Gorlois, Sweet and Milo Thatch bring her to a rendezvous with Kida and the others, only to find that Kida has already formed an alliance with the "creature". The Gorlois uses Mole to dig up the Praying Gargoyle before tying him up and escaping back to Notre Dame with it. She uses it to cast a spell, animating all the stone gargoyles in Paris (although they are not living gargoyles, as she is), planning to use these stone slaves to wipe out every human in the city.

Night falls, and Sweet and Fiona confront the Gorlois. Sweet comes to think the Gorlois does have a legitimate gripe, and tries to put an end to its feud with the Canmores. A huge battle takes place in the skies of Paris, and Sweet destroys the Praying Gargoyle and saves the Gorlois' life allowing her to escape, hoping that the act will change her. Sweet and Fiona exchange bitter words before going their separate ways.

The last thing we see is the remains of the Praying Gargoyle, and the Gorlois swooping down from the sky and snatching up the Atlantean crystal that was hidden within it.

Events in Gargoyles and Team Atlantis took place in two different universes, and "The Last" was the one place where they intersected. [1] Both series -- while dealing with similar subject matter -- were actually quite different. Like Gargoyles, Team Atlantis would have featured Odin (both voiced by W. Morgan Sheppard), Puck, and the Loch Ness Monster. However, there were clear differences between these and their Gargoyles Universe counterparts.

Greg felt that with all the legends that Team Atlantis was going to encounter and make use of, bringing in gargoyles made sense and decided to tell a story about Demona and one of the Hunters. Though Demona is never called by name, Gargoyles fans would have recognized her right away. Instead she is called The Gorlois, which is the Atlantean word for Gargoyle. Fiona Canmore is never referred to as a Hunter except in one vague line of the Gorlois' thrown in for old fans, while new fans would interpret it as referring to Fiona hunting the Gorlois.

As for the Praying Gargoyle being destroyed and revealing an Atlantean Crystal inside, Greg has since revealed that thanks to the crystal, the statue can regenerate itself over a period of sixty years if kept on holy ground. Sure enough, sixty years later in 1980, Demona returns to Notre Dame to claim the statue as seen in "Hunter's Moon Part Three". We also see Demona retrieving a crystal from the remains of the Praying Gargoyle at Saint Damien's Cathedral in 1996. ("Invitation Only")

The story itself is "canon-in-training," but neither the movie nor the rest of the series would have been canon. A terrible pity that the series was canceled mid-production. [2]

Greg has stated that he plans to use the story from "The Last" in the Gargoyles comic book series. [3]

Can I Watch It? 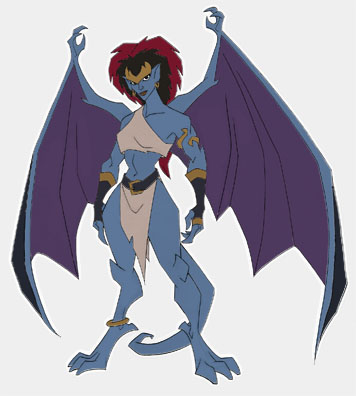 The Gorlois character model by Greg Guler and colored by Vashkoda. Keep in mind that the original was black and white and stapled to the top of the script, so Vash wasn't sure if the colors corresponded to what Guler had in mind.

At the 2003 Gathering in Manhattan, a small group of fans pooled together to purchase the voice tape, script and partial storyboard for the episode. Seeing the latest progress was a regular event at annual Gatherings. [4] They have been working hard to complete the episode by timing the board to the audio, and enlisting artists to help fill in the gaps. It is not complete, but if you're an artist and interested in helping, contact Vashkoda at her gmail.com account (address is her name)

However, since the Gathering came to an end, it currently lacks a regular venue to be viewed.

Most recently, as part of the twentieth anniversary celebration of Gargoyles, "The Last" was shown at the 2014 CONvergence in Minnesota. [5]