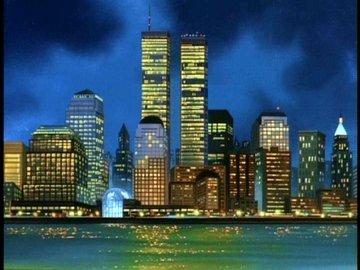 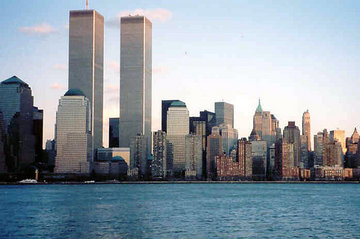 The World Trade Center, or WTC, was a complex of seven buildings that served as headquarters for the Port Authority of New York City and New Jersey and provided office space for numerous businesses and government agencies. The center was famous for its iconic 110-story Twin Towers.

Under Demona's orders, Puck used the top of the World Trade Center as the place from which to temporarily transform all the humans in New York into gargoyles, using the antenna mounted on its roof as a means of amplifying his power. Using the same process, he also turned everyone back to normal from here afterwards. ("The Mirror")

The Eyrie Building offers excellent views of the World Trade Center, with the buildings rising to similar heights above the skyline of Manhattan.

The World Trade Center survived a fire on February 13, 1975 and a truck bombing on February 26, 1993. All of the original buildings in the complex were destroyed or damaged beyond repair in the terrorist attacks of September 11, 2001.

Greg Weisman has stated that, when appropriate, he would show the World Trade Center in the Gargoyles Universe on any date before September 11, 2001, and that he would not show it after that date. [1] While he is "beyond wary about tackling 9/11", Weisman still has expressed an interest in writing a Gargoyles story concerning the events of that date, noting that the Manhattan Clan wouldn't even know what happened until after sunset. [2][3] If, however, in the event it proves too difficult a subject to respectfully broach, Weisman has written that he "won't deal with it at all. Except perhaps to inform character." [4][5]