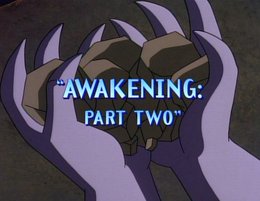 "Awakening: Part Two" is the second televised episode of the series Gargoyles, and the second episode of Season 1. It originally aired on October 25, 1994.

Goliath and the other survivors, seeking revenge, attack the Viking camp. Goliath is robbed of his revenge when both Hakon and the Captain of the Guard fall from a cliff to their death. The Magus blames the gargoyles for what he believes is Princess Katharine's death, and casts a spell that locks them in their stone sleep "until the castle rises above the clouds." Everything now taken from him, Goliath convinces the Magus to freeze him in stone alongside his clan. A thousand years later, David Xanatos takes what remains of the Castle - including the gargoyles - to the top of the Eyrie Building in Manhattan, breaking the spell. Later, they repel an attack on the building by a group of commandos.

Goliath confronts Hakon and the Captain on the cliff, and Hakon blames the Captain for destroying the clan. Driven mad with fury, the Captain attacks the Viking leader, causing both of them to fall. They knock Princess Katharine over, and Goliath saves her instead of carrying out his desired revenge. After Goliath and the Princess return, the Magus feels true regret for turning the others to stone, but can't return them to normal because Hakon had burned the counter-spell.

Katharine tells Goliath that she will take her people away to King Kenneth's kingdom, leaving the castle forever. Goliath asks her to watch over the gargoyle eggs, to which she agrees.

Xanatos puts on an act to the gargoyles, pretending to want to help them, but really wanting to use them for his own purposes. He informs them of how he broke the spell after acquiring the Grimorum Arcanorum containing the Magus's story of the gargoyles' curse. The gargoyles agree to stay at the castle, though Goliath swears to never trust humans again.

Elisa Maza vows to find out what the commotion on top of the Eyrie Building was all about.

"Maybe, but not before you!" - Katharine and Hakon

"Gone, I'm afraid. You are the last of your kind." - Lexington and Xanatos

"Such as?" - Xanatos and Goliath

"Someone I once trusted said the same thing to me, and then destroyed my people." - Xanatos and Goliath

Hudson acquires his sword during the fight with the Vikings in their camp at the start of this episode; however, occasional animation errors would portray him as already having it in scenes set before this battle.

As Hakon burns the page from the Grimorum with the counter-spell on it, he comments sneeringly, "Magic spells, hah! Makes me glad I can't read!" It is tempting to wonder if this line of his (linking his pride in his illiteracy to the act which will ensure the gargoyles' entrapment in stone sleep for the next thousand years) could have originated, in part, out of Greg Weisman's well-known belief in the importance of literacy (which would come, of course, to the fore in "A Lighthouse in the Sea of Time").

In the original version of "Awakening", it was the Magus who made the offer to place Goliath under the sleeping spell, as the best way of making amends that he could think of. Gary Krisel, one of Greg Weisman's higher-ups, argued against this, suggesting that instead Goliath, as a result of his absolute devastation over being alone now, should make this request of the Magus. Greg and his colleagues at once accepted this suggestion, realizing that this dramatically improved the story.

Greg Weisman makes a brief "voice-actor cameo" in the episode as one of the commandos, uttering the line "Nice mask".

This detail was possibly unintentional, but Xanatos' remark, "Pay a man enough, and he'll walk barefoot into Hell", is immediately succeeded by a close-up of the feet of one of the workmen dismantling the castle (though they're in robotic boots rather than bare).

Xanatos' surname is derived from the Greek word thanatos, meaning "death"; ironically appropriate, since we will learn in Season Two that one of Xanatos's chief goals is to defy death by attaining immortality.