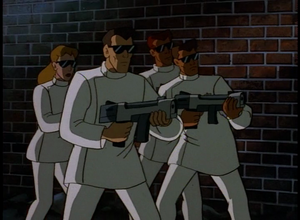 The Xanatos Goon Squad is David Xanatos' security team, so named by Elisa Maza. Their official name is the Xanatos Enterprises Security Force, and they are otherwise known simply as the Commandos.

Their leader is Bruno; the only other distinctive member of it (prior to "Monsters") is a female blond guard whose name is as yet unknown. [1]

In 1996, the entire Xanatos Enterprises Security Force, except for Bruno, was killed at Loch Ness when the submarine they were in sank to the bottom of the Loch after taking on water. ("Monsters")

However, by Halloween of 1996, Bruno had returned to New York City and was a part of, and probably in command of, a larger Security Force at the Eyrie Building. They were charged with keeping the building safe as Xanatos' Masque party was taking place in the Atrium. Their presence helped Owen Burnett convince Thailog to put aside his weapons in his conflict with Goliath. ("Masque")