Difference between revisions of "Anubis" 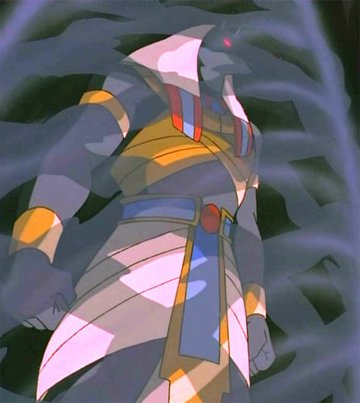 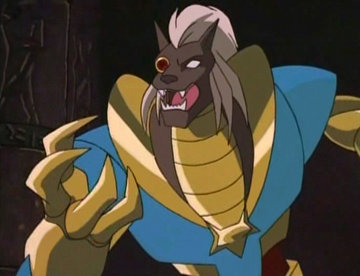 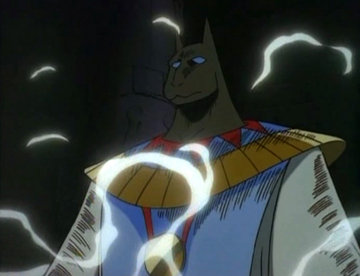 The Emir as Anubis' Avatar

Anubis is a Child of Oberon. He was worshipped in ancient Egypt as a god of death, the afterlife, and embalming.

In 995, Anubis was banished from Avalon alongside the rest of the Third Race by Oberon in order to learn humility. Nevertheless, it is believed that Anubis had been consistently even-handed with his duties before and during his banishment. [1]

In 1995, Xanatos sent the Emir and the Pack (by this time Jackal, Hyena, Wolf, and Coyote 3.0) to Egypt, to summon up Anubis in a secret underground chamber below the Sphinx and somehow force him to make Xanatos immortal. The Emir summoned Anubis and magically held him prisoner, but for his own purposes rather than Xanatos'; he wanted the jackal-god to restore his dead son to life. When Anubis refused, the Emir decided to use the Scroll of Thoth to make himself an avatar of the death-god, so that he could use Anubis' powers to resurrect his son himself. However, Jackal, who had become intrigued by Anubis, deliberately stepped in the way of the spell so that he himself could become an avatar of Anubis. Drunk with his new-found powers, he planned to use them to wipe out all life on the planet, but the Emir (with some prodding by Goliath) came to his senses in time, and used the Scroll of Thoth again to make himself Anubis' avatar. Undoing what damage caused by Jackal that he could, the Emir then sealed off the underground chamber so that nobody could ever summon Anubis again. ("Grief")

In his last seconds, the Emir released Anubis from his bonds, and Anubis eventually attended the Gathering on Avalon. ("The Gathering" Part One) [2]

Anubis is a "death-god", but a responsible one. He takes his powers seriously, viewing them as part of the natural balance and not to be used lightly. In particular, he refuses to bring people back to life (such as the Emir's son), because he feels that it would be favoritism. (It is noteworthy that when the Emir was serving as Anubis' avatar, he could undo Jackal's artificial aging of Goliath, Elisa, Angela, and Bronx, and rejuvenation of Hyena and Wolf, but could not or would not restore what Jackal had actually destroyed.) He is so strongly connected with death, in fact, that while he was magically imprisoned by the Emir, nobody on Earth was able to die.

Anubis generally appears in the form of a man in ancient Egyptian garb with a jackal's head.

Anubis is the Greek rendering of the Egyptian name Inpw, which may have been pronounced something like Anupu or Ienpu.

In ancient Egyptian religion, Anubis was a guardian and judge of the dead, and the god of embalming. In the earliest days of ancient Egypt, he was perhaps the most important god of the dead. Later on, as the worship of Osiris became increasingly prominent, Anubis was reduced in stature, and Osiris replaced him as the main Egyptian death-god. As per Gargoyles, he was usually portrayed as a man with a black jackal's head, but could also be depicted in fully jackal form.

According to mythology, Anubis invented the art of embalming, a ritual which helped ensure a soul's continued existence in the afterlife. He embalmed Osiris himself, when that god was slain by his brother Seth. Anubis also had the role of helping to judge the souls brought before Osiris after their deaths. He would balance each soul's heart on a pair of scales against the Feather of Justice. If the heart weighed the same as the Feather, that soul would be admitted to the paradise ruled over by Osiris, but if it was heavier (weighed down with sin), the soul would be devoured by the monstrous Ammut. The ancient Greeks identified Anubis with Hermes, who was considered the guide of dead souls.