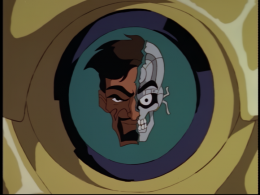 Coyote is a robot, or rather, a succession of robots, designed by Xanatos and the Scarab Corporation, mainly for the purposes of leading the Pack. So far five have been built, and at least three more will be constructed in the future. 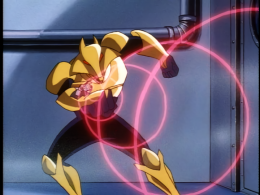 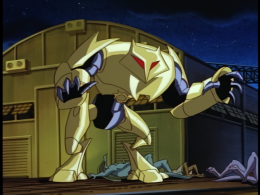 Coyote 1.0 was an exact robotic lookalike of Xanatos, who, with Dingo's assistance, broke Wolf, Jackal, and Hyena out of Rikers Island and led them against the gargoyles. During the battle with the Manhattan Clan aboard the oil tanker Otoshiana Maru, Coyote's true nature was revealed when Bronx gnawed half its face off, giving it a half-Xanatos half-robot appearance, and Lexington then destroyed it, except for its head which escaped. While pretending to be Xanatos, Coyote 1.0 claimed to be wearing battle armor, but it is also possible that his "armor" was actually a built-in part of his robotics. ("Leader of the Pack")

Xanatos recovered the head and made it part of Coyote 2.0, a more powerful and less humanoid robot who became part of the upgraded Pack and led it against Goliath's clan. It was finally destroyed in a collision with a train, and its half-Xanatos half-robot head destroyed separately by Goliath. ("Upgrade") 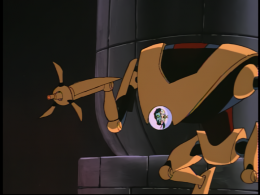 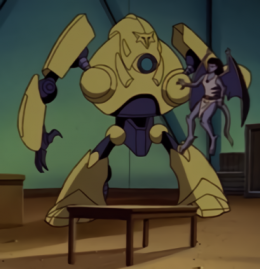 Xanatos built a third Coyote robot and sent it with Jackal, Hyena, and Wolf to Egypt, to assist the Emir in the summoning of Anubis. Coyote 3.0 still bore the image of a half-Xanatos half-robotic face, although now as an image on its monitor screen rather than as an actual physical feature. It was reduced to a pile of rust by Jackal when he became an avatar of Anubis. ("Grief")

Coyote 4.0 was built by Xanatos (at least, in part) out of the iron that the Cauldron of Life had been originally made from; he brought it with him to Arizona to use in capturing Coyote the Trickster (who was not amused by the robot's sharing his name and even threatened to sue Xanatos for copyright infringement). The iron of which Coyote 4.0 was made allowed it to temporarily contain Coyote the Trickster, but the latter finally escaped and tricked the robot into bringing a pile of steel girders down upon itself, crushing it. ("Cloud Fathers") 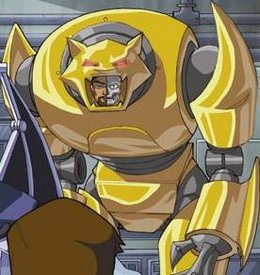 Coyote 5.0 was constructed with the Coyote Diamond as an important component. Coyote 5.0's mental processes are light-based, and the inclusion of the Coyote Diamond speeds up these processes. As a result, Coyote 5.0's A.I. is more enhanced than previous models. [1] Conducting a task on Xanatos' orders, Coyote 5.0, along with Coldsteel, a Steel Clan, and Iron Clan robot, attacked Hudson, Lexington, Griff, Staghart, and Constance while they were protecting the Stone of Destiny at Westminster Abbey. Coyote warned Lexington to abandon the airspace, and when he refused, rendered the gargoyle unconscious (though he was saved by Staghart from falling to his doom). It was soon destroyed the following morning by Coldstone, and what was left of Coyote 5.0's body was brought back to Xanatos by Coldsteel (including the Coyote Diamond). ("The Rock", "Rock & Roll", "Rock of Ages")

In the future, at least two more Coyote robots, will be built. Coyote 6.0 will set up the Ultra-Pack - whether on its own initiative, or upon instructions for somebody else, is also as yet unknown - and Coyote 7.0 will actually lead the Ultra-Pack into battle. [2][3]

By 2198, the line of Coyote robots will have culminated in the figure of Coyote-X. The "X" is a place holder. [4] The 2198 edition of this robot will become a very cunning and ambitious figure with designs to take over the world. It'll have multiple robot and cyborg operatives (and android bodies) at its disposal. [5] After the Space-Spawn invade Earth, however, it will expand its ambition to the conquest of the entire galaxy. [6] 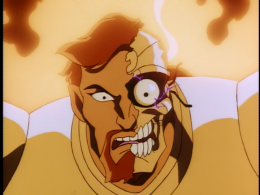 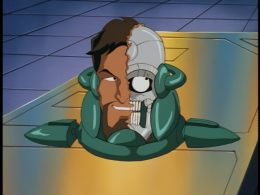 The original Coyote head on a hover pod.

Though the Coyote robots vary in appearance as they are rebuilt, they do share some similar characteristics. All of them are mainly yellow-gold in color with a secondary color ranging from dark blue to metal grey to black filling out the rest of the body. They are generally four limbed and bipedal.

The one common feature all Coyote robots share is the image of a robotic Xanatos head. The right side of the face (from Coyote's own point of view) resembles the face of David Xanatos, and the left side is a robotic metal skull. The image was created when Bronx tore the skin-like covering off of the left side of the face of Coyote 1.0. The original half-robotic head was destroyed along with Coyote 2.0, but its image has reappeared as a part of all subsequent Coyote models, either displayed on a monitor or projected as a hologram. Despite each model getting destroyed, Coyote retains the memories from each of its predecessors. [7] Despite its sophisticated technology and several pre-programmed responses which give off the appearance of being clever, Greg Weisman would not consider any of the Coyote robots seen thus far as artificially intelligent. [8]

Hyena has a strong infatuation with the first three Coyote robots (she never met Coyote 4.0 or Coyote 5.0), which none of them have returned. (It is, indeed, questionable as to whether the Coyote series of robots is even capable of emotion).

It is more than likely that Xanatos christened the Coyote robots thus, not only to fit in with the "wild dog" imagery in the Pack's names, but also as a reference to Coyote the Trickster, in light of the fact that Coyote 1.0 was an exact physical duplicate of Xanatos, and the following four have Xanatos' voice and part of his visage. Xanatos, after all, is himself a trickster.

In an earlier version of the series bible, Coyote was CY.O.T.I. (CYber-Operational Technical Intelligence). It was a robotic coyote head that could fasten itself to different robot bodies and serve as an automated pilot. Ultimately, the name's spelling was changed to Coyote so the audience would not be tipped off to the fact that the character was a robot. [9]

The imagery of the half robotic face is evocative of the Terminator film series. Coyote's tenacity to keep coming back after being destroyed was also inspired from the Terminator series. [10] Wile E. Coyote also inspired how Coyote the Robot kept meeting its end in largely wild and destructive ways. [11] Further, the Marvel Comics supervillain, Ultron, was another inspiration in how Coyote is always renamed by whatever model number it is on. [12]