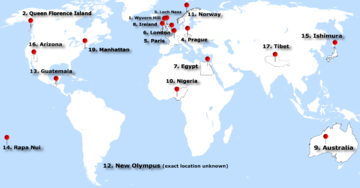 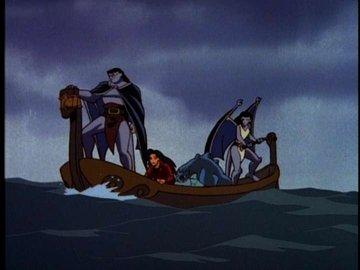 The Avalon World Tour was the journey that Goliath, Elisa, Angela, and Bronx underwent after leaving Avalon.

Because Avalon's magic sends one where one needs to be rather than where one wants to go, Goliath and Company visited a number of distant places before finally reaching Manhattan again. Despite numerous opportunities to go directly back to New York, the travelers felt that their journey was fated and chose to see it through to the end.

The World Tour began with Goliath, Elisa and Bronx arriving on Avalon on December 28, 1995 and leaving with Angela shortly thereafter. Following is a list of locations they visited and the dates in which they first arrived there:

The larger gaps in time during the World Tour were generally due to short stays on Avalon and the difference in the passage of time between there and the real world. In the process of the Tour, Goliath and his companions made contact with the clans dwelling in London, Guatemala, and Ishimura, encountered a number of Oberon's Children, and locked swords with many of their old foes, including the ghost of Hakon, Sevarius, the Xanatos Goon Squad, Demona, Thailog, the Pack, and Xanatos himself.