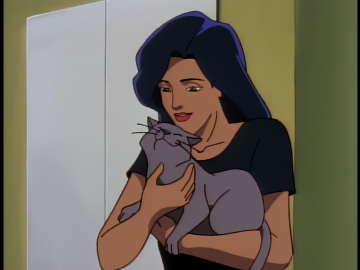 Cagney is Elisa's pet cat. He was named after actor James Cagney. [1]

Greg Weisman has said that Cagney wasn't adopted at a shelter by Elisa, but rather Cagney adopted Elisa, hinting that Cagney may have been a stray cat. [2] In late 1996, Cagney was about three years old. [3]

While the rest of the Manhattan Clan was busy during the events of "Vendettas" and "Turf", Cagney may have accompanied Bronx on an adventure. [4]