Elisa and the Magus inside the Hollow Hill. 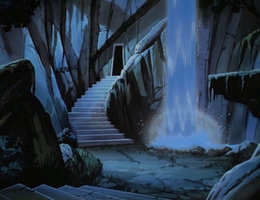 The entrance to the Hollow Hill.

The Hollow Hill is a hill on Avalon. Within it is the cave where King Arthur was laid in his enchanted sleep.

After being mortally wounded at the Battle of Camlann in 542, Arthur was taken by the Lady of the Lake, Nimue, and Morgana le Fay to Avalon's Hollow Hill. The magic that resides in the Hollow Hill was not how Arthur recovered from his wounds. ("Rock & Roll") [1][2]

Arthur lay upon a bier in the center of the cave, surrounded by a great chasm, reachable only by a single narrow bridge. Niches filled the walls, depicting knights and crowned with heraldic emblems, perhaps representing the knights of the Round Table. Two animated suits of armor made from iron guarded Arthur, to ward off anyone who attempted to disturb them. (Who was responsible for them is unknown and their presence is something of a mystery; Third Race magic cannot affect iron, and human magic is barred from Avalon.) [3] As an additional safeguard, the bridge was enchanted to collapse should anyone attempt to cross it; in order to reach the other side, the visitor must make a "leap of faith" across the broken part of the bridge.

The Magus and Elisa came here to awaken King Arthur and bring him to the defense of Avalon against the Archmage. The Magus defeated the suits of armor with a spell, and Elisa crossed the bridge, making the necessary "leap of faith". There, she awoke King Arthur. Later on, the Magus battled the Weird Sisters here and defeated them, though at the cost of his own life. He was laid to rest upon his death on Arthur's bier. The Hollow Hill was sealed soon after. ("Avalon" Part Two, "Avalon" Part Three) [4]