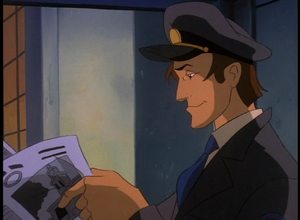 Humans, also called Homo sapiens, are the dominant species on planet Earth (or, at least, they think they are). They are classified in the Order of Primates.

Gargoyles refer to humans as the second of the Three Races, as they evolved after gargoyles but before Oberon's Children. [1] They probably had their origins in East Africa and spread throughout the world from that general area. They became the dominant mortal species on Earth before the dawn of recorded history, replacing gargoyles in that role. [2] Indeed, the decline of the gargoyle species is largely attributed to humanity and its actions. [3][4]

As of 1997, the world human population was approaching six billion individuals, far more than the gargoyle and New Olympian population and probably more than the Third Race as well. They likely outnumber all other sentient species combined. They will continue to be the dominant mortal species on Earth until at least 2198, at which point they will have largely colonized and explored the solar system. [5]

Humans probably invented both language and naming, both of which are somewhat addictive among sentient species. [6] Goliath in particular was named by the human Prince Malcolm, and other members of the Manhattan Clan (such as Hudson) only took names for themselves once Elisa Maza had insisted that "things need names". [7] Other gargoyle clans known to use names for their members (such as the London and Ishimura Clans) have traditionally had strong ties to the local human populations. ("Awakening Part Three", "M.I.A.", "Bushido")

Unlike gargoyles, humans are not very strongly in tune with the natural rhythms of the Earth. Though they tend to live in communities with vast social networks, they generally do not raise their young communally. Biological relationships are likely to be well known among humans and family is generally meant to refer to those of very close genetic relationship (father, mother, sibling, son, daughter, etc.). Humans are incapable of interbreeding with gargoyles in nature, though in at least one instance their DNA has been successfully integrated with gargoyle DNA through genetic engineering. They are capable of interbreeding with members of the Third Race, however, and through such interbreeding have produced many hybrids and half-breeds including most of the New Olympians. [8]

Humans are not inherently magical, but many of its members do study and practice its arts.

Goliath has commented that humans fear what they do not understand. This assertion is corroborated by the negative reaction of most of the population of Manhattan towards gargoyles when they were revealed to the human world. However, the long-standing coexistence in Ishimura and the actions of individuals who have befriended the gargoyles prove that humans are capable of understanding, appreciating, and even loving gargoyles. ("Nightwatch", "Bushido")