Five Members of the London Clan in 1996

The London Clan is a clan of gargoyles based in London, England.

The London Clan is one of the oldest clans still in existence; in fact, it seems likely they predate London itself. Little is known of their long history. We do know that the clan may have encountered King Arthur hundreds of years ago, and upon his "death" The Three came to the London Clan and taught them the Excalibur Poem which the Clan has passed down to each new generation of rookery hatchlings for centuries. ("Pendragon") [1]

Over the years the city of London grew larger. The clan settled in a rural estate outside of London called Knight's Spur, but owned and ran a magic shop called Into the Mystic in the Soho district of the city, so there was still some interaction with humanity. As attitudes towards gargoyles in England changed, the London Clan became more discreet, wearing robes and pretending to wear masks while working at the store. ("M.I.A.") By the early 11th century, most people believed England had eradicated its gargoyle population when in fact the London Clan continued to live on right under the noses of one of England's largest cities. Besides running the magic store, the London Clan spent its time protecting its estate and amassing a large library of information there. It seems that this library contains information on gargoyles and their history (which explains how Griff knew that Goliath looked like "Scottish stock" in 1940 even though gargoyles of Goliath's appearance probably hadn't existed in Scotland for centuries). [2]

By the 20th century, the London Clan was a very large clan. Since their rural estate Knight's Spur can only sustain so many gargoyles, the clan initiated a plan to keep its numbers limited. Mated pairs only were allowed to produce two eggs over their lifetimes instead of the usual three. Males and females are kept isolated from one another during the females' third heats. This system continues to be used by the clan and has kept their numbers stable over the years. ("Rock & Roll") Clearly, they were one of the more successful clans, but in many ways, they had lost the "gargoyle way." While members of the London community, they no longer took any interest in protecting anything beyond their own clan and property. One exception to this was Griff. When the Nazis attacked the city in 1940 during the Battle of Britain, Griff was apparently the only member of his clan that felt they should fight in the War even before the fight reached the clan's store or estate. A time-traveling Goliath arrived from 1996 and joined Griff in his efforts to aid the Royal Air Force. From the clan's point of view, both Griff and Goliath were killed in an aerial battle with the Luftwaffe and were honored with a memorial near the Thames River. 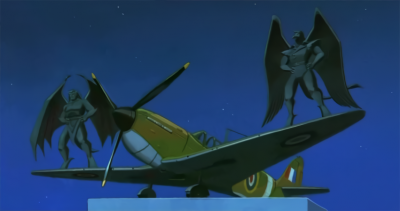 In actuality, Goliath brought Griff back with him to 1996 and there he was reunited with his clan, who by this time had become even more aloof to the needs of the community. Griff's return heralded a new beginning for the clan and they began to once again openly protect their neighborhood. ("M.I.A.") After this, the London Clan was, at best, a worst kept secret in London. The community didn't publicize their existence because of all the good they did for the neighborhood. [3]

Later that year, the London Clan was also involved in the removal of the Stone of Destiny from Westminster Abbey in 1996, though all the details are currently unknown. ("The Rock", "Rock & Roll")

Eventually, the London Clan would become one of the founding clans of the Gargoyle Nation. By 2198, their single small shop in the Soho district had grown into a large shopping complex and the clan acted as merchants. They may have become one of the clans best adapted to the ways of humanity.

In 2198, the leader of the London Clan and all the eggs from their rookery were brought to Queen Florence Island for the formation of a new clan. However the leader and the eggs were kidnapped by the Space-Spawn when they attacked the Earth and were put into stasis.

The revealed members of the London Clan have resembled heraldic animals, such as lions, unicorns, gryphons, hippogriffs, deer and wild boar. They have all shown very small brow ridges and only two known members have shown horns of any sort (one a horn in the center of the forehead, the other two six-pointed antlers). All members have been shown to have feathery wings except one (Constance). The feet are generally either clawed like those of a typical gargoyle or hooved. Skin and hair tones seem to be more "natural" shades such as brown, white, blond, etc. All members seen so far have possessed animal-like snouts or beaks.

The London Clan began using names a long time ago, likely around the time they opened their shop in Soho. [4]

As of November 1996, the London Clan numbered one hundred ninety-six gargoyles strong, with twenty-five eggs in their rookery. Sadly, at that point the clan had no gargoyle beast members. The London Clan continues to raise its young communally. [5]

The London Clan is aware that a gargoyle clan once existed in Loch Ness, Scotland (though it remains uncertain if they know the clan has also survived to the present day). [6]