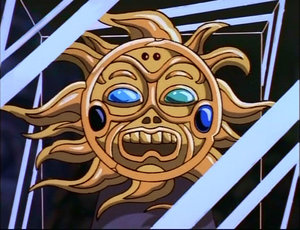 The Mayan Sun Amulet is a magical amulet crafted by a Mayan wizard in 990, and given by him to the Mayan Clan in ChacIxChel, Guatemala. [1]

The Mayan wizard went to these extreme lengths to be sure the pyramid and the Mayan people would be defended day and night. The golden amulet he created was shaped like the sun, and contained four precious stones, one of sapphire, one of obsidian, one of jade, and one of turquoise. It powered four magical pendants, each of which was also made of one of the four precious stones. These pendants caused the gargoyles that wear them to remain awake in the daytime, without entering stone sleep. The four gargoyles who wear these pendants are given names (Zafiro/Zafira, Obsidiano/Obsidiana, Jade/Jada and Turqueso/Turquesa) and remain flesh as long as they wear them and unlike a typical gargoyle, they do not absorb solar radiation during the day, though the pendants do seem to compensate for this. The pendents also allow them to continue aging at the usual gargoyle rate, giving the pendent wearers longer lifespans. [2] The pendants work on gargoyle beasts and will wake a sleeping gargoyle during midday if they are placed on him/her. Traditionally, two of the pendant wearers are male and two are female, though that isn't an enforced rule. Usually the leader of the clan is one of the pendant wearers but that isn't a hard and fast rule either. [3] 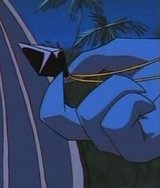 The clan kept the Mayan Sun Amulet safe for a thousand years, passing the pendants on from one group of four gargoyles in a rookery generation to the next. [4] Then, in 1993, disaster struck. A band of looters came upon the pyramid where the clan lived during the daytime, slaughtered the entire clan in its stone sleep (except for Zafiro, Obsidiana, Jade, and Turquesa, who were away patrolling the rain forest), and stole the amulet. It eventually wound up in the possession of the American Museum of Natural History in New York, which put it on display.

When Jackal and Hyena were hired by Preston Vogel to destroy the Mayan gargoyles in 1996, they learned about the Sun Amulet, and Jackal promptly sent Hyena to New York to destroy it; once the amulet was no more, the Mayan gargoyles would become subject to stone sleep, and he could destroy them easily. Before Hyena could destroy the Amulet, however, she was defeated by Broadway and Lexington, who had seen her break into the museum. Discovering that the amulet was magical (although not the exact nature of its magic), they decided to take it into their possession and guard it, so that it could not fall into the wrong hands; Broadway took it back with him to the Clock Tower, to watch over it. ("The Green")

After the clock tower was destroyed by the Canmores, either Broadway or Elisa recovered it. [5] Zafiro will later on come to New York to reclaim it - or it may be reclaimed by Jade and Turquesa, on their way home from Avalon. [6] Whatever its fate, by 2198, it will be in the possession of the Mayan Clan once again. [7]