Difference between revisions of "Thailog" 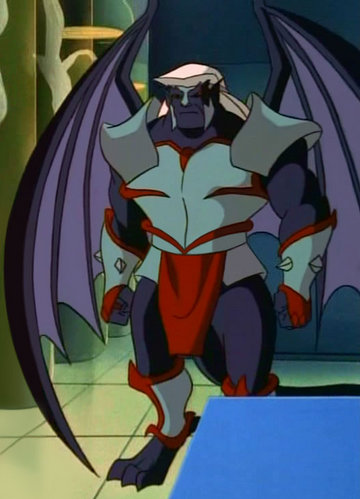 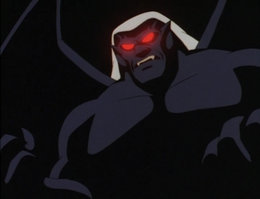 Thailog without the armor 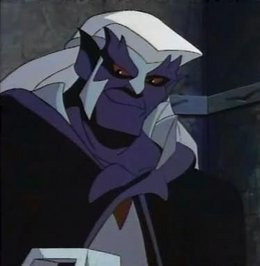 Thailog is a clone made of Goliath by Xanatos and Sevarius.

While Xanatos was still in prison in late 1994, he arranged for a Steel Clan robot to attack Goliath and wound him, afterwards having Owen obtain some cell samples from the gargoyle under the guise of treating his injuries. Sevarius used the genetic material to create Thailog, artificially aging him to the same biological age as Goliath in a matter of months; he also tutored him through subliminal methods, indoctrinating him in Xanatos' ethical code of utter amoral pragmatism. Thus Thailog was "born" in 1995 with a fully grown gargoyle body and a keen, advanced, if twisted, mind.

Xanatos and Sevarius succeeded too well in their goal of creating a replacement for Goliath and his clan; Thailog decided to go into business for himself, and duped Sevarius into "kidnapping" him and holding him for a twenty million dollar ransom. When Xanatos came to pay the ransom, Thailog ambushed both him and Sevarius, seized the money for himself, and planned to kill them both by locking them up within an abandoned oil rig off Black Rock Point and setting the barrels of oil there on fire. Aware of his origins, he arranged (with a bit of an effort on his part) for his third "father", Goliath, to join him there, originally considering to share the money with him. But when Goliath initially regarded him as an abomination and made that clear in no uncertain terms, Thailog decided to kill him as well. Elisa rescued all three of Thailog's "fathers" from death, but Thailog escaped with the money. ("Double Jeopardy")

They later on returned to New York, where they arranged for Demona to be captured by the clan so that she could first arrange to have the gargoyles cloned using robotic mosquitos, supplying herself and Thailog with followers, and then escape, leading Goliath's clan into a trap. Thailog directed Sevarius in the creating of the clones of Hudson and the Trio, but had him secretly create a fifth being, Delilah, whom Thailog intended for his new mate (he had already decided to dispose of Demona, whom he considered too much of a loose cannon). The scheme proceeded according to plan, until Thailog, having captured the clan, ordered Angela's death; Demona protested this, and after learning about Delilah, furiously turned on him. The two wound up fighting each other in the middle of a burning roller-coaster at Coney Island, where Thailog appeared to perish. ("The Reckoning") 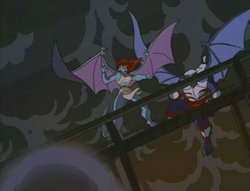 For several nights, Thailog listened intently as Shari told him stories about the history of the Stone of Destiny ("The Rock," "Rock and Roll," "Rock of Ages"). He was also brought in by Falstaff to speak to Yama and Fang in an effort to recruit the Redemption Squad into the Illuminati. Ironically, Thailog's presence in the Society, along with Fang "vouching" for him caused the Redemption Squad to turn down the offer ("Losers").

Thailog is one of the most thoroughly malevolent of the Manhattan Clan's adversaries. He even seems to be aware that he is evil - and is proud of it. Thoroughly cunning and duplicitous, he will happily betray anybody for his own benefit, and is ever ready to enrich himself at others' expense. He also seems to have something of an Oedipus complex, both in his attempts to kill his "fathers", especially Goliath, and in his choice for mates (first Demona, who was Goliath's past mate, and then Delilah, a genetic amalgamation of Demona and Elisa). He is a skilled trickster, rivaling Xanatos in his wiliness.

After his escape from the oil rig at Black Rock Point with Xanatos' money, Thailog adopted the human alias of Alexander Thailog, a reclusive financier whom nobody has ever seen. In this guise he co-founded Nightstone Unlimited with Demona, and he now presumably uses this name in his current position as Nightstone's CEO. He chose the name "Alexander" as an homage to Alexander the Great, the famous Macedonian king who conquered a great portion of the known world in the 4th century B.C., as an echo of his own ambitions.

In creating Thailog (and, later, the other clones), Greg Weisman wanted to avoid creating an identical evil twin that could take the place of the hero and confuse everyone (since he felt this idea "had been done to death"). The altered skin pigmentation (caused, in-universe, by the clone's artificially accelerated aging) was a way of avoiding this. The specifics of Thailog's look were "partially inspired by the changes that John Byrne made to the Fantastic Four's costumes in the eighties", specifically on their return from the Negative Zone. (Greg Weisman has also said that Negaduck, a villain from the Disney series Darkwing Duck, may also have been an inspiration.)[1][2]