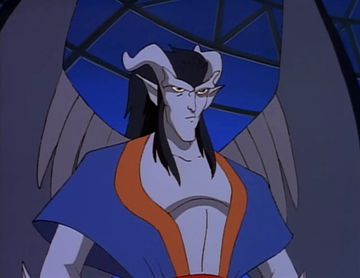 Yama hatched in Ishimura, Japan in 1938. [1] As he grew older he took Sora as his mate and was made second-in-command to Kai. [2] With the rest of his clan, Yama protected Ishimura but over time he grew dissatisfied with the secluded life of the Ishimura Clan, and believed that gargoyles should live more openly with humans. He therefore entered into a covert alliance with Taro, arranging for the building of a "Gargoyle Theme Park" near Ishimura and the secret transportation of his clan there in its stone sleep. Yama believed that, here, his kind would gradually be introduced to the human world; he believed that Taro's intentions mirrored his own.

But he soon discovered that Taro really intended to display the gargoyles as freaks and curiosities to gawking human tourists. Disgusted at the man's falsehood, he defeated him in single combat, thus freeing the clan from him. ("Bushido") However, because he had still assisted Taro in the original act of betrayal, Yama was banished from Ishimura until he could redeem himself for his lost honor. The clan decided that Yama himself would be the judge on when he could return. Saying his farewells to Sora after convincing her not to go with him, Yama went to Tokyo, where the Redemption Squad tracked him down; Hunter offered him a place in the Squad, which would allow him to recover his honor - and threatened his clan if he refused. While Yama was displeased by her threat, he finally accepted her offer. ("The Lost")

After training with the Squad in Paris, the group arrived in Manhattan on a mission to track down Dr. Anton Sevarius. ("Estranged") Yama saved Hunter from Fang in the tunnels beneath the city, but they were both taken captive by the mutate and brought to Sevarius' lab, where the scientist intended to inject Yama with a mutagenic formula, turning him into a gargoyle-human mutate. Fortunately, Dingo and Matrix saved him from this fate and the Squad went on to foil Sevarius' plan to release the CV-1997 Carrier Virus upon the humans gathered at Times Square. They were not, however, able to prevent Sevarius from escaping, nor to stop one of his test subjects, Tasha, from killing herself. When the captured Fang attempted to make a joke about this turn of events, Yama violently assaulted him and nearly killed him, but was stopped by Dingo and Hunter (who had whispered something in his ear). Yama allowed Fang to live, but was furious to discover that the mutate would be joining the Squad. Yama and Fang continue to have a poor relationship. ("Louse")

Yama has grey skin, black hair, and two pairs of curved horns. He has a blade on the end of his tail and blade-like spikes on his forearms. His wings are unusual, with no claws on the wrists, and strange markings that look like feathers.

Yama and Sora are mates, although Yama's exile from Ishimura has, for the moment, raised a barrier between them.

Also, he was Kai's second-in-command until his banishment. [3]