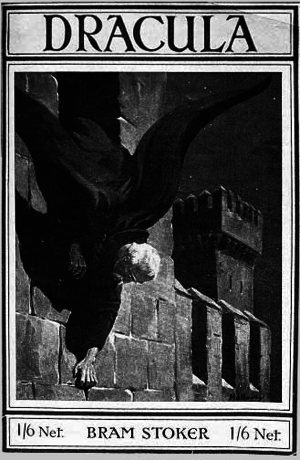 Cover for the 1916 edition of Dracula.

Dracula is a vampire figuratively immortalized by Irish novelist Bram Stoker. Greg Weisman has stated his intention to use the character in the Gargoyles Universe in one form or another. [1] It has been hinted that Dracula himself will one night roam the hallways of Castle Wyvern. [2][3] 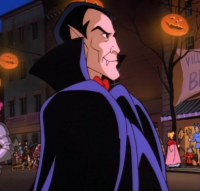 A person dressed as Dracula on Halloween 1995.

As in the real world, Dracula is a well-known figure of legend and popular culture. Several characters, including Elisa Maza, have mentioned Dracula in relation to creepy places or situations. ("Awakening: Part Three", "The Mirror") Dracula is also a popular Halloween costume, with at least one person dressed as Dracula attending the Greenwich Village block party in 1995. ("Eye of the Beholder")

In Stoker’s novel, Count Dracula was originally a medieval Transylvanian Voivode who waged war against the Ottoman Empire. An accomplished “soldier, statesman, and alchemist”, he supposedly studied at the Scholomance, a legendary school of the dark arts hidden somewhere in the Carpathian Mountains and overseen by the Devil himself.

Dracula eventually rose from the grave as an undead vampire, presumably due to his necromantic studies. For centuries he terrorized the local peasants, lurking in a ruined castle somewhere in the Borgo Pass and attended by three female vampires who may be his wives, daughters or concubines. In the later years of the 19th century, Dracula conceived a plot to relocate himself from the desolate wilderness of Transylvania to the bustling metropolis of London, where he could prey on its “teeming millions” in relative anonymity. To this end, he lured Jonathan Harker, a young English solicitor, to his Castle to facilitate the purchase of a new lair in London. Once Harker has outlived his usefulness, the Count abandons him to the mercies of the three vampiresses.

Once arrived in England, Dracula begins preying on Lucy Westerna, a young British socialite. Over the course of several weeks, he slowly drains her of blood until she inevitably succumbs to death and rises again as a vampire herself.

The novel reaches its climax in the shadow of Castle Dracula, where the hunters race to intercept Dracula’s coffin before his mortal servants can carry it back to the safety of his domain. The heroes manage to fight their way through the vampire’s minions, though Quincey is mortally wounded in the process. Just as the sun is about to set and Dracula regain his full powers, Harker and Quincey drove their iron knives into the vampire’s throat and heart respectively. The Count’s undead form crumbles to dust and his evil seemingly ended forever.

As a vampire, Dracula possesses a number of supernatural powers. First and foremost, he is virtually immortal and supposedly invulnerable to mortal weapons. He possesses the strength of twenty men and can climb sheer walls in a “lizard like” fashion. He can summon storms and winds, command “meaner” animals such as rats and wolves, change his form to that of a wolf, bat or mist and mentally influence certain sensitive humans such as sleepwalkers and the mentally ill. By far, his most sinister power is the ability to transform his victims into undead like himself via a blasphemous “Baptism of Blood”.

Dracula is also cursed with a number of weaknesses and limitations due to his unnatural nature. Most notably, he must feed on the blood of the living to maintain his undead existence, and spend at least a portion of every day sleeping in the consecrated soil of his own grave. He is repulsed by garlic and religious iconography such as a crucifix. He casts neither shadow nor reflection. He cannot cross running water under his own power except at slack or full tide, nor can he enter a home unless previously invited. Contrary to subsequent adaptions, Dracula is not burned by sunlight and is quite capable of operating during the daytime if need be. Though he can only call upon the majority of his supernatural abilities at night.

According to Van Helsing, Dracula can only be slain by driving a wooden steak through his heart, cutting off his head and stuffing the mouth with garlic; or by firing a “sacred bullet” into his coffin. Though this seems to contradict the end of the novel where he is apparently slain by common iron knives.

Dracula’s name is derived from that of the historical 15th century warlord Vlad Dracula AKA Vlad the Impaler. Scholars are divided as to what extant Stoker’s fictional Count was inspired by the historical Vlad, or if Stoker even knew much about the historical Vlad beyond his name. On the one hand, both the Count and Vlad were Voivodes (a title roughly translating as “Prince”) who fought the Ottomans before being betrayed by their “unworthy brother”. Vlad’s habit of disposing of his enemies via being impaled alive and other gruesome methods certainly fits the Count’s morbid and sadistic personality.

On the other hand, Vlad never ruled Transylvania, ruling instead the neighboring principality of Wallachia. Though Vlad was born in Transylvania, arguably making it his “native soil”. The historical Vlad was Romanian, an ethnic Vlach descended from the ancient Dacians who inhabited the Balkans in Roman times. Stoker’s Count is Hungarian, an Ethnic Székely who proudly boasts direct descent from Attila the Hun. The most likely explanation is that Stoker mixed and matched various aspects of Eastern European history and folklore, prioritizing dramatic effect over historical accuracy.

How closely the Dracula of the Gargoyles Universe resembles either his literary or historical counterparts remains unknown.