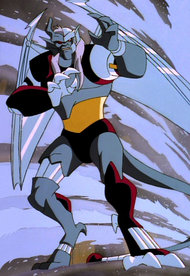 "Reawakening" is the thirteenth televised episode of the series Gargoyles and the final episode of the first season. It originally aired on February 3, 1995. The episode was written to have many parallels to "Awakening", the series opener. The similarities lie not just in the title, but in many instances within the plot and various, more subtle references, such as the way Goliath tells Elisa he needs "a detective".

"Reawakening" tells the story of Coldstone's creation by Xanatos and Demona, who team up for the first time since "Awakening". More poignantly, the episode tells the story of the Manhattan Clan's reawakening by once again becoming proactive members of their community and vowing to protect the island of Manhattan. (more...)