From GargWiki
(Redirected from Lady Macbeth)
Jump to: navigation, search 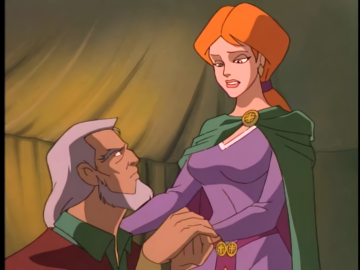 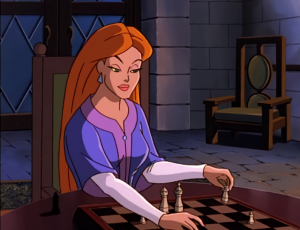 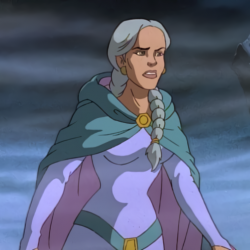 Gruoch was the wife of Macbeth.

Gruoch was born in 1005. [1] Gruoch was the daughter of Bodhe. She and Macbeth first met in 1020, and began to fall in love with each other on that occasion; she helped save him from Gillecomgain the Hunter when the latter came to Castle Moray to murder Findlaech. ("City of Stone Part One")

In 1032, Duncan commanded the wedding of Gillecomgain and Gruoch; it was a wedding distasteful to her, for she still loved Macbeth and had no fondness for Gillecomgain. (Gillecomgain does not seem, himself, to have truly loved Gruoch, but merely lusted after her.) After Gillecomgain was slain by Demona, Gruoch and Macbeth were wedded. ("City of Stone Part Two") Shortly afterwards, she gave birth to a son, Luach; it is uncertain as to whether Luach's father was Gillecomgain or Macbeth, although Macbeth raised Luach as though he were his own son. [2][3]

Gruoch became Queen of Scotland at Macbeth's coronation in 1040, and reigned alongside him until his overthrow in 1057. After Macbeth's "death", they were parted forever, for Macbeth had to leave Scotland so that the Scots would believe him to be truly dead, while Gruoch had to remain to support Luach in his war with Canmore. ("City of Stone Part Four") She committed suicide shortly after Luach and Bodhe were slain in battle. [4]

Gruoch was deeply in love with Macbeth, to the point where she was willing to commit high treason by defying Duncan's order to marry Gillecomgain and run off with Macbeth. Had Macbeth not insisted she go through with the marriage, this outcome was likely. ("City of Stone Part Two")

Gruoch was Macbeth's wife in actual history, and her life seems to have been very close to the way that Gargoyles portrayed it. She was indeed Bodhe's daughter, and her first marriage to Gillecomgain and being mother to Luach are both historically correct. In real history, she was also the granddaughter of Kenneth III (997-1005).

Gruoch is best known today, of course, under her Shakespearean title of "Lady Macbeth", in which role she has become infamous as one of the greatest female villains, not only in Shakespeare' plays, but in literature in general. This role is, of course, a far cry from the sweet and gentle Gruoch of Gargoyles - the Lady Macbeth of Shakespeare, in fact, is far closer to Demona in character - which, given her marriage to Macbeth in "Sanctuary", is rather appropriate.