From GargWiki
(Redirected from Marshall, Travis)
Jump to: navigation, search 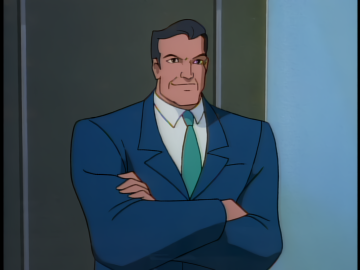 Travis Marshall is a news reporter for WVRN (and more recently, an anchorman for Nightwatch).

Travis Marshall has reported on many events that took place in Manhattan since the gargoyles' awakening, including Xanatos' donation of the Eye of Odin to the Museum of Modern Art and its subsequent theft ("The Edge"), Coldstone's rampage in Times Square ("Reawakening"), Fox's appearances in her were-form ("Eye of the Beholder"), the after-effects of Demona's broadcast of her "stone by night" spell ("City of Stone" Part Three), the launching of Fortress-2 ("Outfoxed"), Dracon's destruction of Art and Lois' restaurant ("Protection"), the birth of Alexander Xanatos ("The Gathering" Part One), and the gargoyles' battle with the Hunters at St. Damien's Cathedral ("Hunter's Moon" Part Three). He also hosted a television debate on Nightwatch between Macbeth and Margot Yale, the same night that Goliath and Elisa had their first encounter with the Quarrymen. ("The Journey")

Although his background was never explored on the show, Greg Weisman and Michael Reaves envisioned Travis Marshall to be from the old school style of journalism, preferring to be out on the streets, asking tough questions and disdaining fluff journalism. [1] [2]