From GargWiki
(Redirected from Redemption: Chapter 5)
Jump to: navigation, search 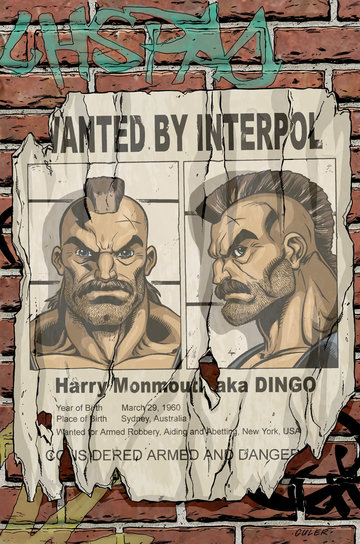 "Strangled" is the fifth issue of the Gargoyles: Bad Guys comic by SLG, and Chapter five of the Redemption story arc.

As of August 31, 2008, SLG's license to produce single issues of the Gargoyles: Bad Guys comic has ended. The material that would have made up issues five and six is included in the trade paperback collection, Gargoyles: Bad Guys - Redemption, as "bonus material".

What's on the mysterious island that the Squad has so desperately been trying to reach? Who sent the flying Robots? And how much does Dingo know about their attacker - a figure from his past?

In Chapter Five, the Redemption Squad's battle with the flying robots becomes the main story at last, rather than the frame to the story of the Squad's formation - though we still get several flashbacks. We now learn that the robots were guarding a secret Illuminati base on the island, that the Redemption Squad had been sent to take down.

Greg Weisman had mentioned at "Ask Greg" that the Director (the Squad's hidden superior) was at war with the Illuminati, but even without that revelation, sharp-eyed readers would have been able to predict our leads going to battle with the Society after "Estranged". Hunter and Castaway's parallel questions to each other about their mysterious backers, and the Casablanca Hotel's echo of the Hotel Cabal, signaled that, especially to everyone in the audience who knew about Greg's philosophy that a good antagonist should reflect the protagonist.

As the Redemption Squad fights the robots, and enters the Illuminati's island lair (complete with a tapestry bearing the familiar one-eyed pyramid symbol), a new set of flashbacks appear, this time to Dingo's childhood in Australia, when he was still "Harry Monmouth" and had not yet become Dingo. His mother Mariah (apparently a single parent) disappears; we see his shock as he comes home from school to find her missing (the shock stands out all the more since, just before he learned she was gone, he was shouting in joy over the high grade he had received on his math test - and then crumples the test up as the news hits him). John Oldcastle, apparently a friend of the family, takes Harry in and raises him - but also trains him to become a thief like himself. Oldcastle seems friendly and pleasant, despite his criminal ways - but on the last page of this chapter, we discover with a shock Mariah's true fate, and the role that Oldcastle had in it.

Oldcastle's role in Dingo's life proves relevant when the Redemption Squad are attacked by a group of mysterious highly-skilled operatives, and Dingo recognizes one of them, Pistol, as one of Oldcastle's old gang, like himself. Oldcastle is indeed the leader of the Squad's assailants, only he has now changed his name to Falstaff, and even resembles (both in appearance and dress) his namesake from Shakespeare's history plays remarkably well. In these final two chapters, Greg Weisman draws upon Shakespeare once more, bringing one of the Bard's most famous characters into the Gargoyles Universe to stand alongside Macbeth, the Weird Sisters, Oberon, Titania, Puck, and the ColdTrio in their "Othello-Desdemona-Iago" moments - to my delight.

The chapter continues to contain many delightful details, such as Fang sitting by himself at the Squad's conference table in Paris, looking perfectly at ease even if nobody else is thrilled with his presence, or the look on Oldcastle's face when Harry first sports his mohawk. And the story moves forward effectively to its climax....

The Redemption Squad's continuing battle against the robots (up until the point when the doors slam shut behind them) is adapted from the leica reel.

The young Harry's remark about his mother Mariah, "She's the wind", is a reference to the song "And They Call the Wind Mariah".

"John Oldcastle", Falstaff's original name, was the first-draft name for Falstaff in Shakespeare's Henry IV Part One. The original John Oldcastle was an early 15th century English knight, a former friend of Prince Hal/Henry V who rebelled against him after becoming a Lollard (a religious sect in late medieval England founded by John Wycliffe, a sort of proto-Protestant movement that wanted to curb the power, wealth, and luxury of the Church and translate the Bible into English) and was executed in 1417. The Famous Victories of Henry the Fifth, an Elizabethan history play, portrayed Oldcastle as one of Prince Hal's friends but gave him only a small role; Shakespeare, when he wrote Henry IV Part One, developed him into the familiar comical figure of today. However, apparently to avoid trouble with the real Oldcastle's descendants (who were prominent at court), Shakespeare changed the name of his character to "Falstaff" (a few traces of the original name survive in Henry IV Part One, such as when Prince Hal calls Falstaff "my old lad of the castle"). In the epilogue to Henry IV Part Two, Shakespeare even stresses that Falstaff and John Oldcastle were separate people. (When the Admiral's Men, a rival acting company to Shakespeare's troupe, the Chamberlain's Men, put on a historical drama about the original John Oldcastle in 1599, they insisted in the prologue that he was nothing at all like Falstaff.)

Falstaff's gang of thieves (Mistress Doll, Bardolph, Mistress Quickly, Points, and Pistol) are all named after associates of Falstaff in Shakespeare's Henry IV plays. See their individual entries for further information. Eastcheap also owes its name to these plays; it was the part of London where the Boar's Head Tavern, Falstaff's favorite haunt, stood.