From GargWiki
(Redirected from Maol Chalvim)
Jump to: navigation, search 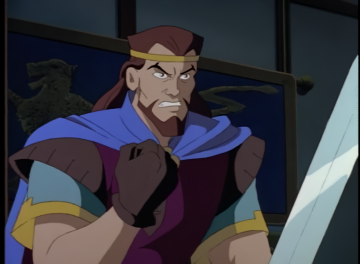 He was much more aware of Constantine's true nature than was his father. After Kenneth's murder, Maol Chalvim was forced to flee the court to stay out of Constantine's reach. ("Avalon Part One") In 997, he fought alongside a TimeDancing Brooklyn and Findlaech of Castle Moray, and he helped his cousin Kenneth overthrow Constantine, in which Kenneth became king as Kenneth III. ("The Gate", "Tyrants", "Phoenix")

Eight years later, in 1005, Maol Chalvim overthrew him in turn to become King of Scotland as Maol Chalvim II. [1][2] He had three daughters, who each married a powerful lord; two of these daughters were the mothers of Duncan and Macbeth, by which they both had claims to the Scottish throne. [3] Maol Chalvim favored Duncan and, by 1020, had invested considerable authority into his grandson (who by this point may also have "incapacitated" Maol Chalvim to some degree). [4][5]

Maol Chalvim II, also known as Malcolm II, was a real Scottish king, and a strong one. He was particularly noted for extending the boundaries of Scotland southwards and consolidating his rule over it. His history went pretty much the same way as that of his Gargoyles counterpart.