Difference between revisions of "High Noon" 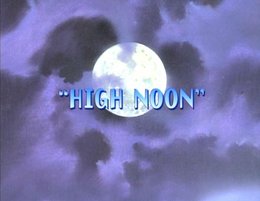 "High Noon" is the twenty-sixth televised episode of the series Gargoyles, and the thirteenth episode of Season 2. It originally aired on September 25, 1995.

This is another good episode for "bit-characters". Not only does Officer Morgan play a major role here, but Brendan, Margot, and the Jogger all show up among the passers-by at Belvedere Castle.

Elisa Maza (and through her the gargoyles) learns that Demona now turns into a human during the day, rather than turning to stone (an ability she has had since "The Mirror"). Elisa is able to recognize the human Demona later, in the episode "Sanctuary".

Macbeth and Demona are still under the control of the Weird Sisters, following the events of "City of Stone Part Four". They will remain dominated until "Avalon Part Three".

Three talismans that the Manhattan Clan had been protecting at the Clock Tower are stolen in this episode by Macbeth and Demona, so that the Weird Sisters can give them to the Archmage (in "Avalon Part Two"). The Grimorum Arcanorum had been there since "Enter Macbeth", the Eye of Odin since "Eye of the Beholder", and the Phoenix Gate had been there since "Vows".

Coldstone is reactivated in this episode. He had been dormant since "Legion". Coldstone next appears in "Possession", although his next chronological appearance is depicted in "Reunion".

Macbeth inaccurately describes Puck as a "changeling". His use of the word implies that it is being used to mean "shape-shifter"; in fact, a changeling, in fairy mythology, was a substitute baby left behind by the faerie-folk whenever they stole a human infant from its cradle, sometimes a fairy baby, more often a very old fairy pretending to be a baby. There is no hint in the series that Puck ever had such an experience.

When Lexington is typing in passwords in an effort to reactivate Coldstone, among the words that he tries are "Othello", "Desdemona", "Iago", and "Weisman".

Demona's eyes glow red even while she is in human form (at the moment when she angrily confronts Macbeth at the end of the episode, just before the Weird Sisters step in). Evidently Puck's transformation spell has not completely removed her gargoyle qualities during the daytime.

After Demona turns human in front of Elisa, she strikes the same pose Elisa did in "The Mirror" when posing as a guard for Titania's Mirror at the museum. Ironically, the reflection of this pose stayed in the mirror after Elisa moved and Puck's "gift" for Demona was the last thing he did when she summoned him from it and the last thing before she smashed it.

The title of this episode and its theme of responsibility in the face of frightening odds comes from the 1952 film, High Noon. [1]

After Elisa is captured by Macbeth and a human Demona, she is thrown against a wall, knocking her out. This is cut. Instead we see Macbeth throwing her but we don't see her impact with the wall. It cuts right to where she has already landed on the floor and gone unconscious.