Difference between revisions of "Jalapeña" 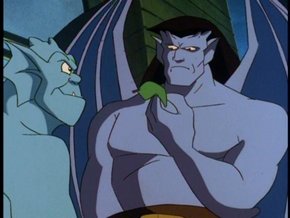 Goliath is about to have a life altering experience.

Jalapeña is the feminine form of jalapeño. Jalapeños are large chili peppers, known for being quite spicy. While Elisa Maza was undercover, she and Tony Dracon shared a jar of them, which was later given to Broadway. After Dracon was arrested, Goliath tried a jalapeño, and subsequently yelled "Jalapeña!" ("Protection")

Since then, "jalapeña" has become something of a curse word among the Manhattan Clan and has similar usage as the phrase "holy cow" and the like.

Keith David used to shout out "jalapeña" as a replacement for "hallelujah." He picked that up from a Blues singer named Bernadine Mitchell. Voice Director Jamie Thomason bet Greg Weisman he could not work that into the show, and Greg bet that he could. [1] Later, Gary Sperling wrote and story edited "Protection" (poor, innocent Gary Sperling), and Greg worked in a little subplot involving jalapeño peppers, so that at the end, Goliath would shout "Jalapeña!" [2]

Frank Paur and others who worked on the show hated it. [3]

Though Goliath's encounter with jalapeño peppers at the end of "Protection" leads to it becoming a pseudo-curse, Broadway uses it in that sense earlier in the episode, before Goliath's experience.

Prior to its usage in "Protection", Brooklyn says jalapeña when parasailing for the first time in Marvel Comics Gargoyles #5 "Venus In Stone".