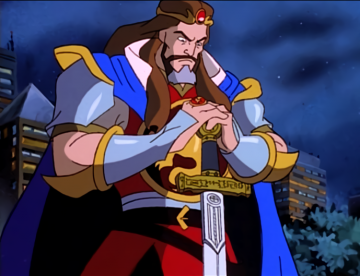 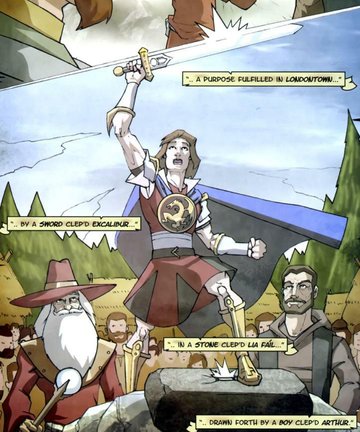 A young Arthur pulling the sword from the stone, watched by Merlin and Pelles.

Arthur Pendragon, more commonly known as King Arthur, was one of Britain's most famous kings. He ruled during the early 6th century, in which time he formed the chivalric order known as the Knights of the Round Table and oversaw many quests, such as the search for the Holy Grail. At the end of his reign he was taken to the mystical island of Avalon, to sleep until he was needed once more. During this period of rest, he was known as the Sleeping King. Now active again in the modern world, Arthur is searching for his old friend, the wizard Merlin.

King Arthur was born in C.E. 485. [2] He was friends with the wizard Merlin in the 5th century C.E., who taught him how to be a good king and leader, as well as to be slightly more attuned to the mystic. [3] He became King of Britain by pulling the enchanted sword Excalibur out of the Stone of Destiny, and was formally crowned by Pelles on 29th September, 500. He united the various British tribes, forming "a country of beauty and civilization," as Macbeth once put it. During his reign, he became familiar with gargoyles (of both the English variety and others such as Scottish types) and with their true nature, although the details of this alliance are as yet unknown. [4][5] However, in the end, his kingdom fell, and Arthur was mortally wounded at the Battle of Camlann in 542. ("A Lighthouse in the Sea of Time", "Rock & Roll") Arthur was taken away to Avalon (admitted there by Oberon since he owed Merlin a favor) in a boat by the Lady of the Lake, Morgana le Fay, and Nimue, and laid to sleep within the Hollow Hill as the Sleeping King until Britain needed him. [6][7]

According to Arthur himself, he was awakened ahead of schedule by Elisa when the Archmage attacked Avalon in late 1995 (two hundred years ahead of schedule, according to Peredur). He helped organize the Avalon Clan and their allies against the Archmage, and personally defeated Macbeth in the battle that followed. Afterwards, he decided to explore the outside world, and departed from Avalon. ("Avalon" Part Three)

Arthur had an as-yet-unknown adventure in the mortal world and then returned to Avalon in February 1996. Arthur's reaction to seeing modern-day London suggests that this adventure took place in a location largely untouched by civilization. He considered staying on Avalon, but ultimately decided to leave aboard a skiff to reclaim Excalibur. [8][9][10] The skiff that he took brought him to London on May 18, 1996, where he decided to stand vigil in Westminster Abbey. There, after midnight (making it May 19), he met Griff, and re-encountered the Stone of Destiny, which told him that he must prove himself worthy of wielding Excalibur again, and transported both Arthur and Griff to New York City (specifically to the roof of the Guggenheim Museum). There, they met Hudson and the Trio, who assisted them in their quest; however, Arthur's quest also came to Macbeth's attention, and he also decided to search for Excalibur. The two former kings vied for the magic sword in the Brooklyn Botanical Gardens, where they found it inside a stone dragon. Arthur regained his sword at last, but forgave Macbeth and accepted him as an ally. Afterwards, he decided to embark on another quest, to find Merlin, with Griff, whom he knighted, to accompany him. ("Pendragon")

Months later with help from Macbeth, Arthur and Griff returned to London and made contact with the London Clan. [11] In November 1996, Arthur and Griff again encountered Macbeth, Lexington and Hudson while they were near Westminster Abbey safeguarding the Stone of Destiny in its move back to Scotland. Arthur and Griff's quest for Merlin had been unsuccessful, so Arthur had returned to the London clan's home at Knight's Spur to do more research on Merlin and himself. He, Griff, Constance, and Staghart joined them in their efforts to protect the Stone. ("The Rock", "Rock & Roll", "Rock of Ages")

After the Stone of Destiny was brought to Peredur fab Ragnal in Castle Carbonek, it informed him of Arthur's re-awakening, thus bringing Arthur to the official attention of the Illuminati for the first time. Arthur and Griff will have a series of clashes with the Illuminati as they continue their search for Merlin, presumably stemming from this revelation; also, Blanchefleur, who learned of Arthur's re-awakening from the Stone alongside Peredur, will join forces with them at some point. ("Rock of Ages") [12]

Arthur's search for Merlin will take him to such places as Tintagel, Stonehenge, (assuming that he had not visited them during the first phase of his search, before November 1996) and even the South Pole. [13] After he and his companions find Merlin at last in his Crystal Cave and free him, they will embark on a quest for the Holy Grail (in which they will likely run into Goliath and Elisa again). [14][15] In time his actual identity would be publicly revealed, with some (though not all) world leaders recognizing him as the 'true' King Arthur. [16] Arthur will eventually found a "New Camelot" in Antarctica, of all places - perhaps related to his visit to the South Pole during his quest for Merlin.

Historians and scholars are still divided on the question of whether there was a real King Arthur or not. Some believe that he was a real historical figure, if magnified by legend, a Romano-British war leader who fought the invading Saxons in the late 5th century C.E., while others believe him to be a purely mythical hero or demi-god. The theories about Arthur are numerous; Geoffrey Ashe, for example, has identified him as Riothamus, a British king who disappeared fighting King Euric of the Visigoths in Gaul around C.E. 470, while other historians have linked him to Ambrosius Aurelianus, a British leader who fought against the Saxon invaders in the late 5th century C.E. (he appears in Geoffrey of Monmouth as Aurelius Ambrosius, Uther Pendragon's older brother and Arthur's uncle); or to Lucius Artorius Castus, a Roman officer who led a contingent of Sarmatian auxiliaries posted in northern Britain in the late 2nd century C.E. The mystery will probably never be answered, but in the context of Gargoyles, it hardly matters. For the King Arthur of Gargoyles is definitely the Arthur of medieval legend.

Arthur first appears in Welsh legend as a mysterious, shadowy figure. The earliest extant mention of Arthur, a reference to him in the late 6th century poem The Gododdin, makes it clear that already Arthur had gained a reputation for being a powerful warrior; the poem's composer, Aneirin, says of one particular warrior that he was a magnificent fighter "although he was not Arthur." A 9th century Welsh historian usually known as Nennius (although his link to the name has recently come under debate) claimed that Arthur fought against the Saxons in twelve great battles, culminating in the siege of Mount Badon, where he personally slew 960 Saxons; while Badon was a real battle, we have no solid evidence that Arthur actually was there. Other Welsh tales portray him in a more "fantastic" environment, hunting the monstrous wild boar Troit or invading the Welsh Otherworld of Annwn in pursuit of a magical cauldron (see the entry on the Cauldron of Life for further information).

King Arthur came more to prominence in 1136, when Geoffrey of Monmouth wrote his History of the Kings of Britain, in which Arthur played a major role. Geoffrey's book was a medieval best-seller, and Arthur became the most popular part of it. As more and more people in Britain and Europe eagerly wrote tales about Arthur and his court, the legend grew, until it reached its more or less present form in Sir Thomas Malory's Le Morte d'Arthur, written around 1470.

The story of King Arthur, in its essence, runs as follows. Uther Pendragon, High King of Britain, fell in love with Igraine, the beautiful wife of Duke Gorlois of Cornwall, and made war upon her husband to seize her. Since Igraine was immured inside the impregnable fortress of Tintagel, Uther had Merlin magically disguise him as Gorlois, so that he could gain access to her, and thus begat Arthur. When Arthur was born, Merlin took him away and gave him into the care of a loyal nobleman named Sir Ector, who raised Arthur alongside his own son Kay. When Arthur was fifteen years old, Uther having died by then, he came to London with his adopted family, and drew a magical sword out of a stone and anvil, thus revealing himself to be the rightful King of Britain.

After bringing peace to a war-torn Britain, Arthur married Guinevere, the beautiful daughter of King Leodegrance of Cameliard, and, with Merlin's assistance, founded the Knights of the Round Table, holding sway in the splendid castle of Camelot. His Knights went on a quest for the Holy Grail, and three of them (Galahad, Percival, and Bors) achieved it. But all was not well in his kingdom. His half-sister, Morgan le Fay, hated him and plotted to assassinate him several times through magic. Arthur also unwittingly slept with another half-sister of his, Queen Morgause of Lothian and Orkney, and begat upon her a son, Mordred, who grew up to become another bitter foe. To make matters worse, Guinevere and Arthur's best knight, Sir Lancelot du Lac, fell in love with each other. While they did their best to keep their affair secret for many years, it was at last exposed, and a civil war broke out between Arthur and Lancelot.

Mordred took advantage of the war to seize the throne and proclaim himself King of Britain. Arthur broke off his war with Lancelot in Gaul and returned to face his traitorous son; they met in battle at Camlann, where nearly all the Knights of the Round Table were slain. Arthur killed Mordred, but was himself mortally wounded. He was taken away in a boat to Avalon, where his wounds would be healed. When Britain most needs him, he will return, to rescue it from whatever great peril besets it and to restore the glory of Camelot.

Since Malory, many noteworthy writers have covered the legends of King Arthur, including Alfred Lord Tennyson in his Idylls of the King, T. H. White in his The Once and Future King, and Mary Stewart in her Merlin trilogy. Even President John F. Kennedy's term in office evoked the Arthurian legend through its nickname "Camelot".