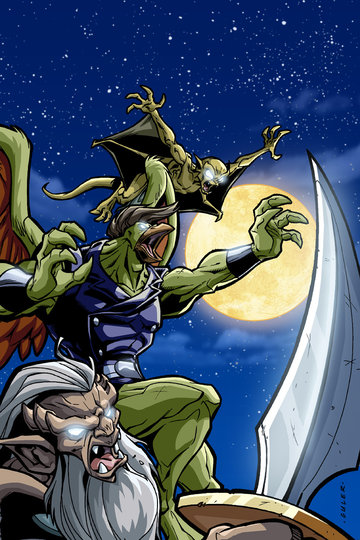 "Rock of Ages" is the ninth issue of the Gargoyles comic by SLG, and Chapter Nine of the Clan-Building story arc.

On August 31, 2008, SLG's license to produce single issues of the Gargoyles comic ended. The material that would have made up single issues nine through twelve is included in the trade paperback collection Gargoyles: Clan-Building, Volume Two. It was adapted into a Radio Play and performed at the Gathering of the Gargoyles in 2008.

CLAN BUILDING: Chapter 9, "Rock of Ages" - David Xanatos makes his final play for the Rock - in broad daylight when the gargoyles sleep as stone! But will the Illuminati be pleased with the end result? And what's this obsession over Fox's new shoes?

After over a year, "Rock of Ages" has finally been released, bringing the Stone of Destiny story to a satisfying conclusion.

The struggle over the Stone of Destiny between Xanatos and his robots (including Coldsteel and Coyote) on one side, and the gargoyles (including the reinforcements of Coldstone and Coldfire), Macbeth, and King Arthur continues, extending even into the daytime, as the ColdTrio and Coyote battle it out (appropriately enough, at Coldstream Bridge). Coyote finally receives the same fate as his four predecessors (demolished by Coldstone), and Coldsteel damaged enough to be forced to retreat. There are hints that the Coyote series is moving closer to full sentience; Coldsteel speaks thoughtfully of the robot's potential.

Xanatos achieves a victory, of a sort, successfully making off with the Stone, which finds its way to the Illuminati leadership. Yet, all four of the humans fighting over it (Macbeth, Arthur, Xanatos, and the Illuminati's leader, the newly-introduced Peredur fab Ragnal) learn from the Stone how pointless their struggle ultimately is, for the Stone is far more than a mere rock; it is a transcendent force that no mortal can ultimately possess. The scene where it makes this revelation to them is one of the most moving moments in the story. (And typically, Xanatos alone among the four does not seem awed, merely listening to the Stone with his usual sneaky smile.)

We meet not only Peredur, the head of the Illuminati, at Carbonek, but also Duval (introduced in "The Journey" and now on-stage at last), an ominous-looking cyborg, and Blanchefleur (who ranks as one of the Illuminati's three Number Threes) - providing one of the greatest jolts in the series. Greg Weisman's original announced plan was for Peredur (under the name of Percival) and Duval to be the same person; now it turns out that they are separate people. (Few readers will ever take "canon-in-training" for granted again!) And Peredur and Blanchefleur learn, to their consternation, that Arthur is awake and abroad in the outside world again - two hundred years ahead of schedule (which contains a hint of what hour of need Arthur was originally supposed to be awakened for in the Gargoyles Universe). Peredur, shaken, plans to alert the upper echelon members of the Society at once.

Shari continues to narrate the story of the Stone, bringing it down to the present day - and, in fitting style, concluding at the very point that #7 begins. To quote Goliath in "Hunter's Moon" Part Three, "Things have come full circle."

The title of this chapter is a reference to the famous hymn composed by Reverend Augustus Toplady, inspired by the refuge he found in a cave in Somerset from a thunderstorm in 1775.

Shari concludes her account of the Stone of Destiny's history, including Edward I's seizing it in 1296, Robert the Bruce giving a piece of it to his Irish ally Cormac Maccarthy after the Battle of Bannockburn in 1314, which would become the Blarney Stone, and the 1950 theft from Westminster Abbey (already alluded to in "The Rock"). All of these are actual stories about the Stone of Destiny, rather than inventions of the comic book.

Macbeth is depicted as taking part in the Battle of Bannockburn, on the Scots' side.

When Xanatos signals Coldstone and Coldfire to return, they are in Tibet; apparently they had gone back there following the events of "Possession".

Peredur fab Ragnal, introduced in this episode, is apparently the Gargoyles Universe version of Sir Percival. "Peredur" is the Welsh version of Percival; "fab Ragnal", Welsh for "son of Ragnal", alludes to Roger Lancelyn Green's depiction of Percival as the son of Sir Gawain and Lady Ragnell (Green's retelling of the Arthurian cycle is one of Greg Weisman's favorite versions). (Presumably, Peredur reckons his descent from Ragnal because Percival was raised by his mother in the various renditions of his story.)

The Stone of Destiny lists among its other identities (besides those that Shari mentioned in her story): the Stone of Mora (the stone upon which the Kings of Sweden were crowned until the 15th century), the Philosopher's Stone (a magic stone sought by alchemists which could turn lead into gold), the Burden of Sisyphus (in Greek mythology, Sisyphus was condemned to eternally push a mighty rock up a hill in the Underworld), the Rock of Gibraltar, the Pillars of Hercules (the original name, in the classical world, of the Straits of Gibraltar), Uluru (a sacred mountain in Australia, also known as Ayer's Rock), and the Rosetta Stone (the stone that French linguist Jean-Francois Champollion used to discover how to translate Egyptian hieroglyphics, now on display in the British Museum).