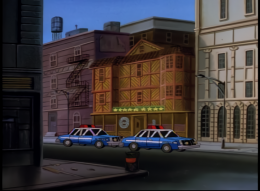 Brod’s favorite restaurant was a Czech restaurant in New York City where Tomas Brod was a frequent patron. The name of the restaurant is unknown, but the cuisine served there was traditional Czech. [1]

In August 1996, Brod was at the restaurant with Jack Dane, Salli (an undercover Elisa Maza), and other members of his gang when Matt Bluestone questioned him about a raid on one of Tony Dracon’s chop shops. Brod denied the attack on the chop shop and used the restaurant as his alibi.

Later, Dracon’s men destroyed the restaurant as a way of striking back at Brod. Brod came upon the restaurant’s flaming remains and revealed that it had been his favorite restaurant. The loss of it made him very angry. ("Turf")

The restaurant looked to be an older building made of wood. It was multiple stories and a green banner with stars hung on the front of it. The interior had a quaint “old country” look about it.