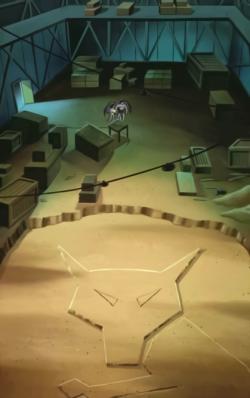 The Coyote Carving is a representation of Coyote the Trickster in his animal form, cut into the earth by a local Native American tribe (probably the Hopi) near Flagstaff, Arizona.

The Carving is, in some way, connected to Coyote the Trickster, or at least, under his protection. Xanatos became aware of that in 1996, and so came to Arizona to destroy it, ostensibly for his company Xanatos Construction to build over it, but in reality, to lure Coyote the Trickster out into the open to defend his carving; Xanatos then intended to capture Coyote (using the Coyote 4.0 robot) and gain immortality from him.

Fortunately, he was foiled by Goliath, Elisa, and their companions when they came to Arizona on the Avalon World Tour (alongside Peter and Beth Maza). ("Cloud Fathers")

While the Coyote Carving featured in Gargoyles does not exist, it was inspired by the various petroglyphs and pictographs that can be found throughout the American Southwest. It's fabrication is the result of the crew's effort to be respectful of the culture, specifically following the advice of Michael Horse, one of the voice actors featured in "Cloud Fathers". [1]