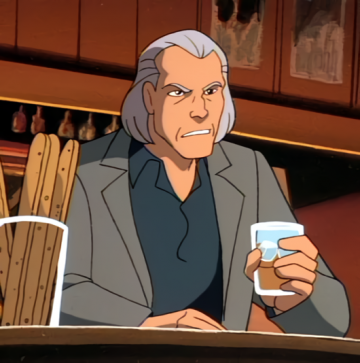 Peter Maza at the Pool Hall. 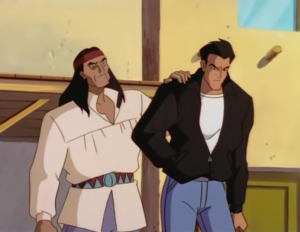 Peter Maza is of Native American descent, primarily from the Hopi tribe in Arizona. He was dissatisfied with life in Arizona, however, and in 1960, against his father Carlos' wishes, left for New York City. There he entered the NYPD (in which he is a desk sergeant by now), met and married Diane not long afterwards, and is now the father of Elisa, Derek, and Beth Maza.

Peter and Elisa have a special rapport, Elisa being the first of Peter's kids to follow directly in his footsteps and become a cop. Peter is also friendly with Elisa's boss, Maria Chavez; he was once her boss. [1] The fact that Captain Chavez has a history with the Maza family no doubt helped Elisa keep her job when she came back after the Avalon World Tour.

Peter Maza learned about the gargoyles from Diane following her encounter with them in Nigeria, but first met Goliath, Angela, and Bronx when they arrived at Flagstaff, Arizona with Elisa on the Avalon World Tour. Peter had come back to Flagstaff to help Beth investigate Xanatos' plans to destroy the Coyote Carving. There he helped them free Coyote the Trickster from Xanatos' captivity, and finally made peace, of a sort, with Carlos (if in a posthumous sense). ("Mark of the Panther", "Cloud Fathers")

Peter is or was in some way connected to Coyote the Trickster, due to having performed the Dance of the Coyote as a boy. Coyote seems to have drawn him back to Arizona for this purpose. It is as yet unknown if this connection still holds after their recent encounter. ("Cloud Fathers") Peter spent most of his adult life as a dedicated Agnostic. But that may have changed. [2] His favorite food is Diane's chicken molé. ("The Cage")

In the future, Peter will be wary and largely uncomfortable about Elisa's relationship with Goliath. [3][4]

Peter Maza was named after Peter Morwood, a writer on the Gargoyles production team.