From GargWiki
(Redirected from Dracon)
Jump to: navigation, search 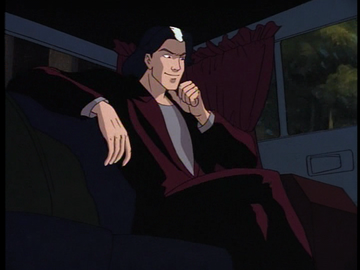 Anthony "Tony" Dracon was a caporegime in one of New York's most prominent organized crime families.

The Dracons have long been a major criminal family in New York, going all the way back to Tony's grandfather Dominic Dracon in the 1920s, at least, and Tony has avidly followed family tradition. By 1994, Tony was one of only a few major criminal operators in New York City. [1] He is even bold enough to steal from Xanatos Enterprises.

It was such a theft, in fact, which first brought him into contact with the gargoyles. Not long after the gargoyles' re-awakening in New York, Dracon and his men stole a shipment of particle beam accelerators from Xanatos Enterprises. By coincidence, later that evening, Broadway, while visiting Elisa in her apartment, accidentally shot her with her own gun. Since Elisa had confronted Dracon over the theft at the Park Manor not long before, both Captain Chavez and Goliath made the logical error of assuming that Dracon had shot Elisa, and Goliath promptly went after Dracon to avenge Elisa upon him. Broadway, having discovered that Dracon was behind the theft of the particle beam accelerators and even selling them to various muggers in New York, went after Dracon on his own to put a stop to the trade, and at Dracon's temporary headquarters, helped Goliath defeat Dracon and his men, but also stopped him from killing the mob leader by confessing that he was the one who had shot Elisa. Goliath destroyed all but one of the particle beam accelerators remaining in Dracon's possession, and then placed the remains of that last one besides Dracon and his men to make certain that the police would connect the gang with the theft. ("Deadly Force")

Dracon was quickly arrested, but managed to get out of prison, presumably by bail, not long afterwards. Joining forces with his grandfather Dominic, he began searching the cellar of the defunct Silver Falcon night club for some jewels that Mace Malone had cheated Dominic out of in the 1920s, kidnapping Matt and Elisa when they stumbled upon his operation. Broadway came to the detectives' rescue, however, and helped capture Dracon, who went to prison again. ("The Silver Falcon") 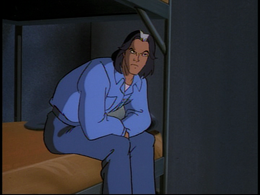 Dracon got out on bail not long afterwards, however, and quickly started up a protection racket, extorting money from various businesses in New York. Goliath and Broadway joined forces with Elisa again to help shut down his scheme, and this time, Dracon stayed in prison much longer. He continued to run his criminal operations behind bars, until, not long after the end of the Avalon World Tour, he became involved in a turf war with Tomas Brod. The turf war continued until Elisa, with some help from Angela and the trio, managed to get both gangs broken up. Dracon soon found himself sharing a cell with Brod, to both men's mutual annoyance. ("Protection", "Turf")

Dracon's powerbase was devastated after the turf war, and Greg Weisman has hinted that when Tony returned, he wouldn't be a crime boss. [2]

Dracon's most distinguishing feature is a white streak in his hair, much like that of a skunk, the result of the fright that he received from his first encounter with Goliath. [3]

In theory, Dracon reported to the head of the Dracon Family. In practice, he operated solo. [4] Known members of Dracon's mob include Glasses and Pal Joey. He has known Glasses since their early teens. [5]