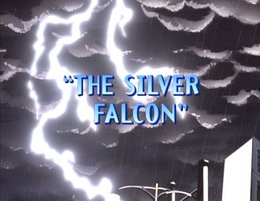 "The Silver Falcon" is the nineteenth televised episode of the series Gargoyles, and the sixth episode of Season 2. It originally aired on September 12, 1995.

Elisa and Broadway team up to try to solve Matt Bluestone's disappearance. Like Matt before them, they stumble onto Tony Dracon's operation at the defunct Silver Falcon nightclub where Dracon and his grandfather, Dominic Dracon, are attempting to locate the jewels that Dominic's old crime partner Mace Malone ran away with years before. Figuring out a clue left by Mace, Elisa tricks Dracon into bringing her and Matt to the Apex Tower. [1] Broadway, who also figures out the clue, comes to their rescue, and together he and Elisa apprehend the two Dracons and have them arrested.

Elisa is hesitant at first in allowing Broadway to help her look for Matt. She finally relents at Matt's apartment building after Broadway secretly followed her there and saves her from Pal Joey, who was there searching for Malone's letter in Matt's apartment. Pal Joey blows up the apartment and gets away.

Keeping an appointment she found off of Matt's calendar, Elisa meets Martin Hacker at Cleopatra's Needle. There, Hacker gives her a 70 year old letter addressed to Dominic Dracon from Mace Malone that Matt had found in Tony Dracon's police files and had Hacker authenticate. Following Malone's old office address on the letter, Elisa meets with G.F. Benton, who is really Dominic Dracon in disguise. He gives her the address of the nightclub where Dracon is working and alerts his grandson of her imminent arrival. Elisa and Broadway are buried by Glasses when they arrive and Elisa is captured while Broadway turns to stone underground.

Matt admits to Elisa that he followed the trail of Malone's letter to Dominic because he believed it had to do with the Illuminati and Mace's disappearance in the organization. He apologizes to his partner for keeping her in the dark about the lead.

Tony Dracon discovers a note left by Mace where he had been searching for the jewels that proclaims "Right idea. Wrong falcon." Elisa directs Tony to the jutting falcon head at the Apex tower opposite Malone's office. She retrieves a satchel in the mouth of the falcon then jumps off and is secretly caught by Broadway. Broadway saves Matt and takes out Tony Dracon while Elisa confronts Dominic Dracon, who finds out that the satchel contains only marbles and a mocking note from Malone.

"Ears like these don't miss much." - Elisa and Broadway

"Not you guys again!"
"When someone messes with your partner, you're supposed to do something about it!" - Broadway and Tony Dracon

Beginning in this episode, Tony Dracon now sports a white streak in the middle of his hair. According to Greg Weisman, this was to make him stand out better, since he'd thought that Tony had appeared a little too bland in "Deadly Force"; the in-story rationale was that the streak was due to his shock at encountering the gargoyles for the first time. (Greg briefly considered also giving Glasses a similar streak, but decided against it, simply because Glasses did not need it; he had been a distinctive figure from the start.)

Broadway has begun taking reading lessons after "A Lighthouse in the Sea of Time", enough to read and understand Mace Malone's note to the Dracons (though he has some understandable difficulty in pronouncing the word "right").

Mace Malone is mentioned for the first time, and a black-and-white photograph of him is seen, although Mace does not appear in person until "Revelations".

Martin Hacker is introduced as Matt Bluestone's former partner in the FBI. He reappears in "Revelations".

Broadway's trenchcoat and fedora were partly inspired by the similar outfit of Ben Grimm aka "The Thing" from the Fantastic Four in Marvel Comics, who wore it to disguise his "monstrous" appearance when in public. [2]

A line that rewards subsequent re-viewings: Benton refers to Dominic Dracon in the 1920s photograph of him and Mace Malone as a "sharp-looking young feller" - which takes on a new meaning when it is revealed at the end that Benton was really Dominic in disguise.

The notion of Benton being Dominic in disguise entered the episode late in its development; originally, he really was the CPA that he appeared to be. However, the production team realized that Elisa needed her own antagonist to face at the end (Broadway taking care of Tony and Matt of Pal Joey), and so added the revelation of Benton's true identity in Act Three.

Broadway turns to stone in the daytime even while underground, without any exposure to sunlight. This illustrates that it is not the sun that turns the gargoyles to stone, but (according to Greg) their internal biological clocks. He is also not particularly lethargic upon awakening, which would seem to put Anton Sevarius' theory of the stone state having a solar energy collection function into doubt, although his body could possibly have tapped his considerable body fat to compensate.

Though not canon, "Religious Studies 101: A Handful of Thorns" contains an excellent depiction of Dominic Dracon driven mad by the crushing discovery he had received, talking endlessly about the jewels that Mace Malone had stolen from him, and easily exploited by Demona in this condition.

The title of the episode is a homage to/pastiche on the 1930 detective novel, The Maltese Falcon, written by Dashiell Hammett. The novel was adapted for the screen three times: The Maltese Falcon (1930), Satan Met a Lady (1936), The Maltese Falcon (1941). The 1941 adaptation directed by John Huston and starring Humphrey Bogart is the best known. The movie Broadway watches and later quotes paraphrases a line of dialogue from the The Maltese Falcon: “When a man's partner is killed, he's supposed to do something about it. It doesn't make any difference what you thought of him. He was your partner and you're supposed to do something about it.” In the episode, the word “killed” is toned down to “messed”. [3]

When we cut from Bluestone at the beginning to Broadway's movie, we originally saw a close-up of the bad-guy's gun firing, and then him running. On Toon Disney they cut out the scene of the gun firing two shots and go straight to the bad guy running.

When Broadway leaps from Cleopatra's Needle to face Dracon's goons, Pal Joey is supposed to say "You again! Plug 'em!" On Toon Disney, however he can only be heard saying, "You again!"