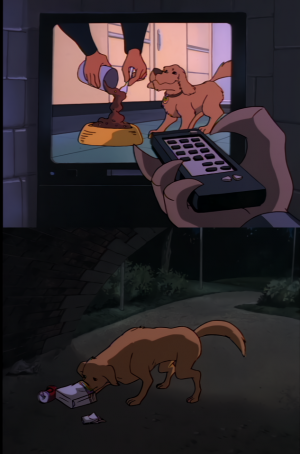 "Rover" is a stray dog. The dog isn't really named Rover, Elisa just referred to him by that name: "Let them chase 'Rover' instead of us."

As a puppy, "Rover" starred in a dog food commercial, but when he grew up he likely became a stray in Central Park. [1]

Goliath and Elisa Maza encountered the stray dog and planted a Scarab Corporation radio transmitter on him in order to lead the commandos away from them.

"Rover" was let go after the commandos caught up with him. [2]