Leader of the Pack 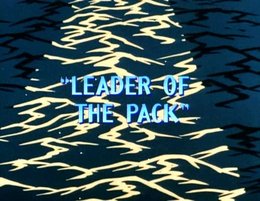 "Leader of the Pack" is the fourteenth televised episode of the series Gargoyles, and the first episode of Season 2. It originally aired on September 4, 1995.

Jackal, Hyena, and Wolf are broken out of Rikers Island by Dingo and the Pack's new leader, Xanatos' robot lookalike, Coyote 1.0, while Fox opts to serve out her time after stopping Hyena from killing a guard. The rest of the Pack escapes in a large air/water craft provided by Coyote, and motivated by his words, plan to get revenge on the gargoyles who they blame for getting them into prison. The clan finds out about the breakout from Elisa, and Brooklyn, Lexington, and Bronx walk into the Pack's ambush at PackMedia Studios, where they are defeated and taken hostage on an oil tanker in the bay. The rest of the clan learns from Owen their location, and the gargoyles fight the Pack on the ship, which goes up in flames when a stray blast from Coyote hits some oil barrels. The Pack retreats after Lexington destroys Coyote's body, and Fox is given an early parole.

Lexington still holds a strong grudge against the Pack, so much so that Brooklyn is worried about him. He tries to remind Lexington what's really important, but the smaller gargoyle refuses to listen. During the battle on the oil tanker, Brooklyn is knocked unconscious and is in danger of falling into the water. Lexington gives up his chance to shoot down the escaping Pack's craft to save his brother, thus realizing his true priorities.

Coyote appoints himself leader of the Pack, which Wolf is not happy about. He tries to take Coyote down, but the robot easily sends him reeling.

Coyote reveals himself to the Pack as Xanatos. Dingo reminds his Pack-mates that Xanatos is the one that helped them, and it was Fox who got them into prison. Coyote comes up with the plan to lay in wait for the gargoyles at Pack Media studios, then has Owen instruct the others where to find them. He also supplies the Pack with uniforms and weaponry.

Hyena harbors an attraction to Coyote, even more so when she finds out he's a robot.

Bronx has a thorough dislike of Coyote from the beginning, attacking him when he gets the chance. It's Bronx who reveals that "Xanatos" is really a robot when the beast chews half the construct's face off, a trait that stays with Coyote for the rest of the series.

Picking Fox up from prison, Xanatos reveals that he was never really interested in revenge, as he had Coyote made to be, and staged the whole breakout and subsequent battles with the gargoyles to get Fox an early parole as well as test the prototype robot. He reveals that he's in love with Fox.

"Because Nietzsche's too butch, and Kafka reminds me of your little friends over there." - Hyena and Fox

"You have your priorities, and I have mine." - Brooklyn and Lexington

"That was no lady!" - Jackal and Brooklyn

"Good evening, uh, Broadway, is it? I've been instructed to invite you to an intimate soiree the Pack is having tonight. If you and your friends are free around midnight, please consider attending." - Broadway and Owen

"Hey, I'm used to it. Besides, it helped me get my priorities straight." - Brooklyn and Lexington

Fox, Wolf, Jackal and Hyena are all released from Rikers Island prison in this episode (although only Fox does so legally). Fox and Wolf have been in prison since "The Thrill of the Hunt", and Jackal and Hyena have been imprisoned since "Her Brother's Keeper".

Fox effectively quits the Pack in this episode, and the role of leader is occupied by new recruit Coyote.

Hyena and Jackal allude to the events of "Her Brother's Keeper" when they learn (incorrectly) that Coyote is really David Xanatos.

Brooklyn alludes to "Enter Macbeth" when he asks Lexington, "How come whenever you and I take Bronx out, we wind up [in trouble]?"

The tag for this episode reveals that Fox and Xanatos are a couple. This was hinted at in Fox's dialogue in "Her Brother's Keeper". Xanatos soon proposes marriage in the episode "Eye of the Beholder".

Coyote 1.0's head survives this episode, and reappears in "Upgrade" (first on its own, then as a part of Coyote 2.0). The half-robotic and half-human face of Coyote 1.0 after Bronx attacks him becomes a recurring image through all of Coyote's incarnations.

Originally, Coyote was to be called "CY.O.T.I.", short for "Cyber Operational Technical Intelligence", and imagined as a robotic head which could fit onto various robotic bodies of differing shapes. Both concepts were lost in the process of developing the series (though a trace of the latter can be found in "Upgrade" with the flying head of Coyote 1.0, which becomes a component of Coyote 2.0). Coyote's name, of course, is doubly appropriate, in light of his introduction into the series. On the one hand, it fits the "wild canid" imagery of the Pack's names; at the same time, it also recalls the Coyote of Native American legend, a celebrated trickster figure - and Coyote is playing a trickster role, both in masquerading as Xanatos (himself a definite trickster by his own admission) and in carrying out a strategy based on deception and misdirection (just what a trickster would do). This aspect would become especially prominent in "Cloud Fathers", many episodes later.

Coyote also was influenced by Wile E. Coyote of Warner Brothers' animated cartoons, in his suffering from numerous cataclysmic misfortunes (being shot through the middle by Lexington, run over by a train, reduced to rust by Jackal-as-Anubis's-avatar, being crushed by a falling set of girders, and blown up by Coldstone).

Bronx suspects Coyote to be a robot from the start, singling him out for attack during the first fight that he, Brooklyn, and Lexington have with the Pack in this episode. (It helps to have a strong sense of smell.)

The title of this episode is most likely a reference to the 1964 song, "Leader of the Pack", by the Shangri-Las. [1]

Fox makes a reference to Franz Kafka while Hyena is tormenting an insect. Most likely, she is referring to The Metamorphosis, a novella by Kafka where the main character, Gregor Samsa, changes into an insect. "Metamorphosis" is the title of the next episode.

The shots of Goliath knocking off Coyote's head and the head subsequently flying through the air were edited out of the Toon Disney broadcast of the episode.

Hyena's remark to Jackal, ". . . and you said there ain't no Santa Claus!" hints at another legendary figure Greg Weisman intended to include in the Gargoyles Universe. [2][3]