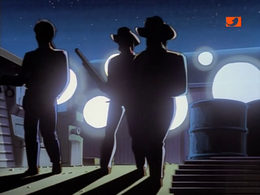 The Tribal Police are the officers of the Hopi reservation near Flagstaff, Arizona.

The tribal police arrived at Xanatos' construction site when Coyote the Trickster tripped the silent alarm in an effort to protect the Coyote Carving. Needing an excuse to get rid of the tribal police, Xanatos had them arrest Peter and Beth Maza who had been invited on the site by Coyote the Trickster, posing as a Xanatos Construction security guard.

The next night, Coyote magically coerced the tribal police into donning Kachina garb and performing the Dance of the Coyote with him in an effort to make Peter believe. After Coyote the Trickster was abducted by Coyote 4.0, the tribal police came out of their enchantment and had no memory of what happened. One of the policemen’s last memory was ordering a pizza. Elisa told them she would be back to explain everything. What kind of pizza they ordered and whether it arrived is unknown. Whether Elisa returned to give them an explanation is also unknown. ("Cloud Fathers")

One of Greg Weisman’s favorite writers is Tony Hillerman, whose novels he has cited as being one of the many influences on the creation of Gargoyles. Hillerman wrote a series of novels about the Navajo Tribal Police. [1]